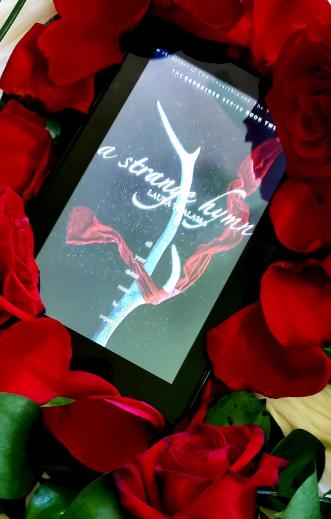 I am so sorry for how reflective this picture is! I only own this book on Kindle and its black cover makes it very hard to photograph.

Last week I reviewed the first book in The Bargainer series, Rhapsodic, by Laura Thalassa. Today I’m going to review the second book, A Strange Hymn. I recommend you read my review for the first book before this one or else this review won’t make much sense. Just in case you decide to go ahead and only read this review, this is a fantasy and romantic fiction series in the New Adult genre. I actually have much less to say about A Strange Hymn than I did for Rhapsodic because overall, I really liked this book. I’ll get into my thoughts after the synopsis. This review will have slight spoilers.

Siren and soulmate to the King of Night, Callypso Lillis survived the clutches of Karnon, the mad king, and his twisted prison. But the nightmare isn’t over. Callie wears the physical reminders of her time as a captive, and mounting evidence suggests the Thief of Souls is still out there.

When a fae celebration thrusts Callie and her mate, Desmond Flynn, into the Kingdom of Flora, they take their investigation with them. But under the bright lights and striking blooms of the realm, they find there are more immediate issues to deal with. No place is more uniquely savage than the great fae halls, and no amount of bargains can save Callie from royal intrigues.

Fairies play dangerous games. Some want love, some want vengeance, some want flesh, and some want things too unspeakable to utter. One thing is for sure: no one is who they appear to be. Not even Des, who only grows more enigmatic with every passing secret.

But the Kingdom of Flora has its own secrets, from bleeding trees to branded slaves and missing guards. Something is stirring in the land of all that grows, and if Callie isn’t careful, it will claim everything and everyone she loves—and her along with it.

I would first like to mention that A Strange Hymn requires the same warnings as Rhapsodic because it alludes to rape, contains sexual content and coarse language. There is nothing truly explicit, in my opinion, but everyone has different comfort levels. The rape aspect is a part of Callie’s backstory and figures into a plot line in the fae world. I would not consider this book to be appropriate for younger readers.

As I said above, I really liked this book. Most of the issues I had with Rhapsodic were taken care of in A Strange Hymn. Two of the issues I had with Rhapsodic was the lack of world building and the sole focus of the story being on Des and Callie’s relationship. That was not a problem in A Strange Hymn. This book takes place primarily in the fae Kingdom of Flora during the Solstice celebration. It gives a much more detailed look into the Otherworld and all the fairies within it. The plot line about the unconscious and disappearing fae warriors was also greatly expanded on and very interesting. There was still a focus on Des and Callie’s relationship but it didn’t overwhelm the other plot lines and I just love the romance in general so I was happy with it.

Another issue I had with Rhapsodic was the amount of telling and not showing when it came to how tough Des was supposed to be. That is also taken care of in this book. There were many instances of Des being the ruthless and cunning leader that we had been told that he was.

My main issue with this book was also my main issue with Rhapsodic, Callie’s best friend, Temper. Her character is expanded on and we learn that she is a very powerful sorceress, which is cool, but she is still written in the most obnoxious and unbearable way possible. I would literally cringe anytime I was reading a scene with her in it. Here is an example of the way she constantly talks:

See what I mean? It’s obvious that she’s supposed to be the sassy and tough black friend but she ends up just being annoying.

A Strange Hymn left off on a HUGE cliff hanger so I’m excited to finish the rest of the series. Overall, this book was great. I love the characters (except Temper) and how the story line is developing. My review for the next book, The Emperor of Evening Stars, will be up next week. I’d love to know if this sounds like a series you’d enjoy! Thanks for reading and have a great day!