I recently purchased the Ulta Beauty Effortless Effect Foundation because it sounded promising. It’s regularly priced at $16.00 but I got it on sale for $7.00 and let me tell you, that was $7.00 too much. This review is going to be short and sweet because to put it simply, I loathe this foundation.

This foundation comes in a convenient, squeeze tube bottle and claims to be hydrating with medium coverage. It contains hyaluronic acid, acai berry, pomegranate and vitamin E. Sounds great, doesn’t it? Well, what it actually is is a different story entirely. This is a fully matte foundation with the consistency of super glue. I do agree that it has light to medium coverage but you’re going to WORK for it. Blending this stuff out is an arm workout. It does not move at all with a sponge, only with a brush or fingers. I tried this three different times using the Milani Complexion Enhancer, my tried and true essence hydrating primer and even straight up oil underneath it… and it STILL wouldn’t blend.

It does have a decent shade range of 26 shades. I initially chose the shade Fair Warm, the lightest available, and it was the color of paper so I exchanged it for Fair to Light Neutral. This shade is too light for me initially but this foundation does slightly oxidize and it matches me then. The overall finish (once you finally get it blended) isn’t terrible but it’s not great. It looked okay on my face overall but looked horrific on my under eyes and around my nose. It also transfers terribly, even when set with powder, and once it starts to wear away, it looks awful.

This is my face with just one layer of foundation. You can still see blemishes poking through but the coverage isn’t bad. 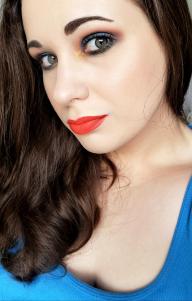 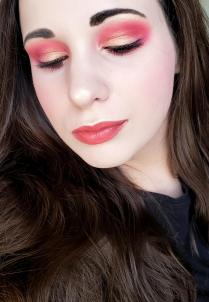 Here’s the foundation on the three different days that I tried it. It looks MUCH better in pictures than it did in real life and my concealer is picking up a lot of the slack.

I didn’t take a picture of my face at the end of each day because it looked the same every time. My chin, above my upper lip and around my nose looked the worst. I typically wear my foundations six to eight hours. I have other foundations, like the ShopMissA Satin, NYX Born to Glow and Hard Candy Glamoflauge, that do not look like this at the end of the day.

I think it’s pretty obvious that I do not recommend this. I have no idea how this foundation passed the testing phase to be sold. All the foundations I mentioned above are a million times better and cheaper so try one of them instead. What is your favorite foundation? Thanks for reading and have a great day!