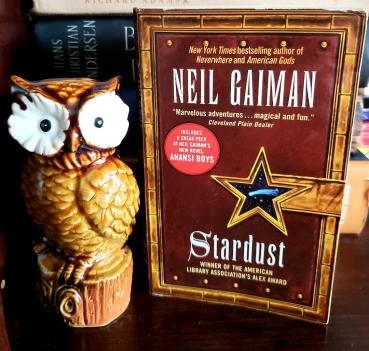 Neil Gaiman is a very popular author but I had never read any of his work, until now. I wasn’t sure which book to start with but I finally settled on Stardust. I picked this book solely because of the synopsis. I have not seen the movie and knew nothing about the overall story. I have very conflicting opinions about this book but I’ll get into them after the synopsis. This review will be spoiler free.

In the sleepy English countryside of decades past, there is a town that has stood on a jut of granite for six hundred years. And immediately to the east stands a high stone wall, for which the village is named. Here in the town of Wall, Tristran Thorn has lost his heart to the hauntingly beautiful Victoria Forester. One crisp October night, as they watch, a star falls from the sky, and Victoria promises to marry Tristran if he’ll retrieve that star and bring it back for her. It is this promise that sends Tristran through the only gap in the wall, across the meadow, and into the most unforgettable adventure of his life.

At face value, I really like this book. It’s whimsical, magical and romantic. Gaiman’s writing style is simply eloquent. He did an excellent job capturing the feel of a fairytale. The characters don’t have a lot of depth but they’re not supposed to. If you read any old fairytale by the Brothers Grimm or Hans Christian Andersen, you’ll find that those characters typically don’t have a lot of depth either. The stories are usually focused on a certain type of character going from point A to point B and learning something along the way. Stardust follows this same layout.

As for the setting and the overall story, it really reminded me of The Chronicles of Narnia by C.S. Lewis and Alice in Wonderland by Lewis Carroll but with some adult moments sprinkled in. Like with the characters, the setting wasn’t fully fleshed out and I never got a totally clear picture of the land beyond the Wall, Faerie. I understand why Gaiman did this. Again, he wanted it to be like a traditional fairytale set in a magical land without all the detail that you would find in a typical fantasy novel. This story is definitely a fairytale, not fantasy.

After reading all that, you’re probably wondering what issues I could possibly have. Well, my issues are with everything I just mentioned. I understand that the book isn’t supposed to have a lot of depth but I wanted more. I also just didn’t care for the main character. Tristran seemed like an idiot most of the time and he doesn’t have much of a personality. His love for Victoria was based off him watching her undress through her window (super creepy) and all of his other relationships were emotionless. The lack of depth with the other characters just made me not care about them. This isn’t a book that will stick out in my memory or that I’ll be inclined to read again.

If you’re a fan of fairytales and don’t mind some mild sexual content and violence, this could be a good read for you. Unfortunately, I just feel very meh about it.  If you’ve read this book or any other book by Neil Gaiman, let me know what you think! Thanks for reading and have a great day!

9 thoughts on “Book Review for “Stardust” by Neil Gaiman”