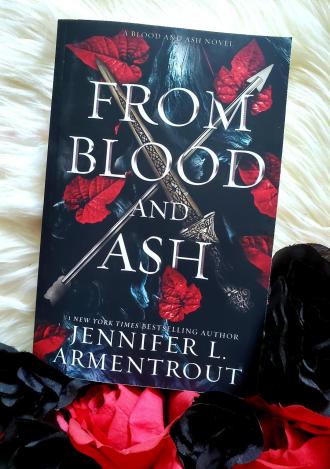 I’m in a group on Facebook dedicated to Crescent City by Sarah J. Maas. In the group, somebody posted about an amazing book they had read, From Blood and Ash by Jennifer L. Armentrout. They were so excited about it that I had to read it. I knew nothing about this author and went into the book pretty much blind but guys… it was so worth it. This is a new release so I’m going to keep this review spoiler free, however, there will be a picture collage down below that contains slight spoilers. Let’s get into the synopsis!

Chosen from birth to usher in a new era, Poppy’s life has never been her own. The life of the Maiden is solitary. Never to be touched. Never to be looked upon. Never to be spoken to. Never to experience pleasure. Waiting for the day of her Ascension, she would rather be with the guards, fighting back the evil that took her family, than preparing to be found worthy by the gods. But the choice has never been hers.

The entire kingdom’s future rests on Poppy’s shoulders, something she’s not even quite sure she wants for herself. Because a Maiden has a heart. And a soul. And longing. And when Hawke, a golden-eyed guard honor bound to ensure her Ascension, enters her life, destiny and duty become tangled with desire and need. He incites her anger, makes her question everything she believes in, and tempts her with the forbidden.

Forsaken by the gods and feared by mortals, a fallen kingdom is rising once more, determined to take back what they believe is theirs through violence and vengeance. And as the shadow of those cursed draws closer, the line between what is forbidden and what is right becomes blurred. Poppy is not only on the verge of losing her heart and being found unworthy by the gods, but also her life when every blood-soaked thread that holds her world together begins to unravel.

From Blood and Ash is a New Adult fantasy with a healthy dose of steamy romance mixed in. While this genre is becoming more popular, there still aren’t many (well written) options within it to choose from. This book, however, is truly a standout. As I said above, I went into this book knowing nothing about the author. From what I’ve gathered on Goodreads, she’s very popular in the fantasy circles and this book isn’t even her best work; at least according to her longtime fans. If this one isn’t her best, I need to get a hold of her other books ASAP. So, why do I love this book? There’s many reasons but number one is…

The characters; oh, the characters. I loved every. single. one. of them. I usually judge the characters in a book harder than anything else. I want them to be fully fleshed out and real. These characters are just that. Poppy is the leading lady in this story and one of the best female main characters… ever. She is so innocent and sheltered because of her life as the Maiden but she’s also brave and compassionate. There were some pacing issues in the story, which I’ll talk more about in a bit, but since we’re “stuck” in Poppy’s head, I really didn’t mind the slow pacing. I just enjoyed her that much. Other than Poppy, there’s Hawke. Swoon-worthy, dimpled, dark haired and golden eyed Hawke. I don’t think I’ve ever fallen for a character quite as hard as I have for him. Maybe Jace Herondale but I think it’s a pretty close tie… Anyways, there’s quite a few other characters that I love or love to hate (the Duke and Lord Mazeen can rot) but the main thing they all have in common is how well written they are.

Along with the characters, I love the world and its religious belief system. This is where it gets really tricky when it comes to spoilers so I’m going to keep it short and sweet. This book combines religion and the paranormal in a very unique way. The religion is similar to that of the ancient Greeks but Armentrout  did an excellent job of making it something new. This religion is the reason why Poppy is called the “Maiden” and it’s a central part of the story. I know I’m being vague BUT if you’re going to read this book, I think it’s best to go in like I did and experience it firsthand.

My only slight complaint with the whole book was the pacing from around the 35% to the 50% points. The story starts out really strong but begins to slightly drag around the middle. It isn’t bad but it’s primarily just Poppy having inner monologues with herself. If you don’t really like Poppy, you’ll more than likely be bored. I’m still giving this book five stars, though, because the last half was excellent enough to make up for any issues.

If you love fantasy and romance, this is the book for you. I absolutely loved Crescent City by Sarah J. Maas and I honestly like this book as much, if not more. I definitely think Armentrout is the stronger writer of the two so if you don’t like Maas, you may like Armentrout. Does this book sound like one you’d love? Let me know! Thanks for reading and have a great day!

2 thoughts on “Book Review for “From Blood and Ash” by Jennifer L. Armentrout”

Leave a Reply to Papertea and Bookflowers Cancel reply