Before I really get into my review I want to warn that this will be filled with spoilers. If you just want a general idea of what this series is about check out my review for Season 1.

Now onto the good stuff. The second, twenty-two episode season of Reign started off great and slowly went downhill. In my opinion, it’s like the writers really thought out the first half and then took the second half in a weird direction, that I hated. 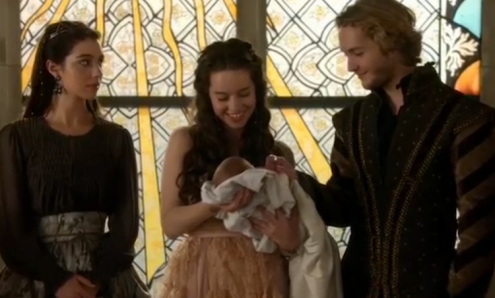 At the end of the first season Francis is rushing from the castle to save Lola who is in labor with his son, John. Plague is everywhere, even in the castle, but Francis, Lola and their son end up making it back at the beginning of the second season. Mary accepts Francis’ and Lola’s son, even though it’s hard for her, because she loves Francis and she loves Lola, one of her best friends. Before the day of the baby’s christening Mary announces to Francis that she is pregnant but soon after she ends up miscarrying. She painfully endures the christening before she tells Francis because she doesn’t want to ruin the day. As a side note, unless I missed it, they literally tell nobody she miscarried. I mean Francis, his mother and Prince Conde (he was with Mary when she miscarried) knew but I don’t believe she told any of her friends. Her friends knew that she was pregnant so it’s odd to me that it was just never mentioned again. However, this is something Reign does fairly often. Big events are just forgotten about no matter how “traumatic” they were.

From here things start going downhill fast. There had been a lot of religious unrest in the kingdom leading to an attack on the castle. A few men manage to get into Mary’s room while Francis is away and they rape her. I feel this scene was handled very delicately and you don’t see anything. However, you know what is going on, so if that is a trigger for you you may need to skip that part. Mary is traumatized and blames Francis for being away, even though she knows that is irrational. Francis feels so guilty and tries to give her the space and time that she needs to heal. Mary eventually does heal but she doesn’t want her husband, she wants his cousin, Prince Louis Conde. This is where I was just pretty much over this season. Francis had been so selfless, loving and always tried to do the right thing for Mary but she turns to another man. This destroys Francis but he gives her permission to have her affair. I feel like this is another weird scenario done by the writers. I feel most men would not be okay with that and most women would not so obviously tell their husband that they want to have an affair, but what do I know?

At the very end of the season Francis passes out and is terribly ill. He has a severe ear infection and is pretty much at death’s door. This brings Mary back to him and eventually he does recover. However, in the last few minutes of the last episode Francis is speaking with Nostradamus, his mother’s soothsayer, and Nostradamus confirms that even though Francis is better now he will still die and soon.

Like I said at the beginning, the first half of this season was fantastic. I loved the way they handled the miscarriage, Lola’s son and the rape but once they brought in the affair it was like Mary became a totally different character. I understand that after the rape she changed and I mean, I’ve thankfully never been sexually assaulted so maybe it would make sense for you to want someone new but to me it would seem like being with the person you love and are comfortable with would be best. Then we find out Francis is dying, *sobs*, and it’s like Mary has wasted all this time on a man she can’t even have and now she has so little time left with the one that truly loves her. If it was the writer’s goal to make your heart shatter for Francis then they accomplished that, as far as I go.

This is only a review of the main story line. There is a lot of other things going on at the same time with Bash, Kenna, Greer and all the others so I do recommend you watch it for yourself, just prepare to be annoyed. I’m over halfway through with season three so I’ll have my review of that up soon. Let me know in the comments if you’ve seen Reign and what you think. There’s nothing I love more than geeking out over the characters that I love, haha! Thank you for reading and have a great day!