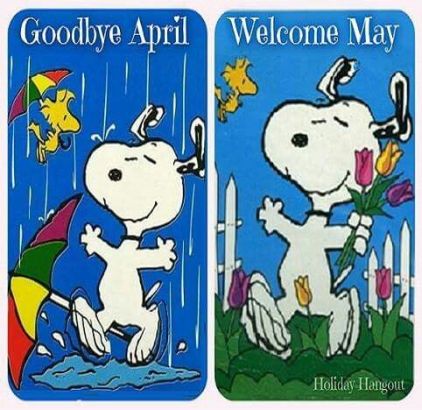 Here we are at the end of another month and it has flown by! I started off the March Wrap Up by telling you about how I had joined a gym and how much weight I had lost so far. I wish I could say that this month I made even more improvements, but I can’t. I slacked off badly this month and it’s nobody’s fault but my own (and Easter chocolate). Last month I had lost up to eight pounds and worked out sixteen times. This month I lost two more pounds for a grand total of ten pounds and only worked out ten times. Pitiful, I know. I’m getting back on track though, because that’s what you have to do when it comes to being healthier. You have to just keep trying.

My Husband, Me and Our Home

This month was pretty uneventful. My husband, James, and I went to the zoo closest to us which was so much fun. We love to travel even if it’s just a short day trip like that. We’re hoping to go to quite a few more places over the next few months. The state of Alabama has it’s flaws but we do have some gorgeous scenery and places to go. I’ll of course take plenty of pictures so you can see what we’re up to, if you’re interested. I’ve also got a ton of home improvement projects planned for this coming month which I’m sure nobody but me cares about, haha! I had planned to have some of them finished by now but I’m a MAJOR  procrastinator when it comes to home improvement work, especially painting which I hate with a passion. However, that’s what it takes to have a nice home so I’ll suck it up and get it done (with some grumbling and complaining).

I disturbed Binx’s nap so I got the stink eye.

As far as TV series and movies on the blog this past month, I finished up my reviews for  Reign: seasons One, Two and Three. I also reviewed Thirteen Reasons Why and the movie The Autopsy of Jane Doe. For this coming month, I’m currently watching The Tudors on Netflix and will have my season one review up as soon as I finish it. It’s honestly kind of boring to me and I’m having a hard time getting through it, which surprises me. Let me know if you have any movie or series suggestions. I’m always looking for good stuff to get into.

Titan chilled in the shade while I worked outside.

Books and Lots of Them

Besides that, I’ve got a TON  of book reviews coming. First up is The Ruins by Scott Smith so keep an eye out for that if you’re interested, probably will be going up right after this. After that I’m not sure what will be next. It honestly just depends on what I’m most interested in. I’ve ordered The Handmaid’s Tale, Jane Eyre, The Yellow Wallpaper and the Mirror Sister’s Series by VC Andrews. All of those should be here soon so let me know what you would like to see first. I know I haven’t reviewed any VC yet but I have basically every book written by her/the ghost writer. I know those type of books, dramas, aren’t for everybody but I would like to know if anybody is interested in them.

She was slapping her brother five seconds before I took this picture.

I’ve been slacking off on my makeup and body product reviews. It’s not that I don’t like them, I do, but I just have to have a reason to buy them or I can’t justify it. My eyeshadow palettes, lipsticks and makeup in general are a bit out of control so I’m trying to use all of that up. However, if I see something awesome or if you request something I have no problem checking it out. I believe my next thing to try will be the Milani Foundation. I’ve heard awesome things about it and Milani always impresses me. Besides that I really don’t have many plans so if you know of something cruelty free and budget friendly that you want to see, let me know. 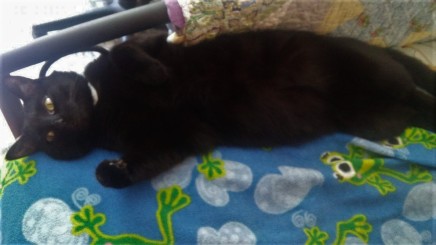 Binx on “his” bed, aka the guest bed.

Guys, thank you so much for the over 40 followers. I really do appreciate the likes, comments and you following me. I don’t make any money from this blog, it’s just a hobby, but it feels good to know that others enjoy what I’ve worked hard on. That’s everything for this month! I hope your April was wonderful and that your May will be even better. Thank you for reading and have a great day! 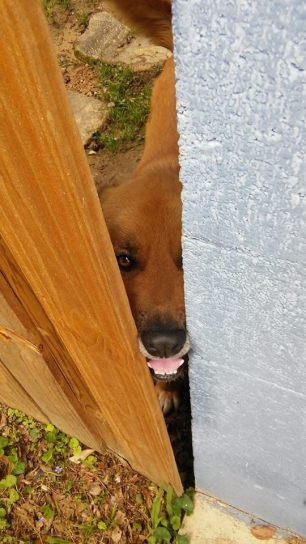 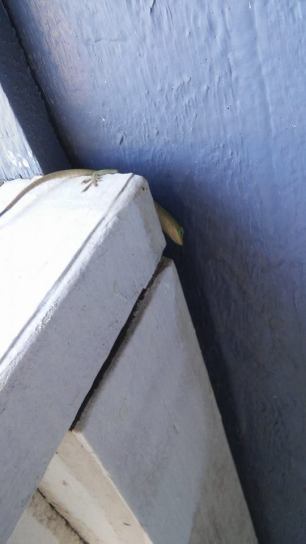 Titan and our porch lizard say: goodbye April, hello May!