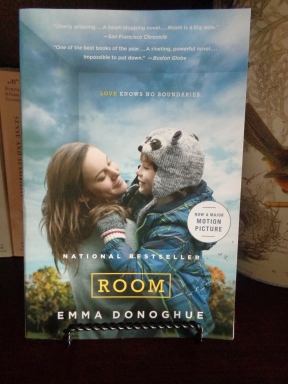 My latest read was a book by the name of Room by Emma Donoghue. I came across this book in the sale pile at Books a Million and thought it looked interesting. There is also a movie based off the book that I have not seen. That’s pretty much it so let’s get into the plot.

Five year old Jack has lived his entire life in Room with his mother, who he calls Ma. At night he sleeps inside a large wardrobe hidden away from the nightly visitor, Old Nick. While Room is Jack’s whole world it is a prison to his mother. She was kidnapped by Old Nick and has been held captive in the room for seven years. She’s endured being raped repeatedly and giving birth to her son alone in this room. She’s desperate to escape and now that her son is five she believes he’s old enough to help her with a very daring plan. The plan works and the two escape but they escape into an overwhelming, and for Jack, brand new world. Can the mother and son adjust to their new found freedom or will it tear them apart?

I enjoyed Room very much. I liked that it was told from Jack’s point of view. You’re seeing the world through the eyes of a child who has lived his whole life in a room with just his mother. Up until he turned five his mother taught him that everything they saw on TV wasn’t real so this led Jack to believe that the Room was just surrounded by space and that his mother and he were the only real people. I had one issue with this book. When they escaped they go to a type of mental hospital. This makes sense because Jack is very limited intellectually and it’s a shock to his mother being in the real world again. However, just a few days after being there Jack’s mother tries to kill herself. This was very random to me and didn’t seem to fit with her character. I suppose it could make sense because she was just so overwhelmed but it just struck me as odd. Besides that, everything else about the story was very well written.

Room is a quick and entertaining read that I do recommend. I don’t see it being a book that I re-read and I’ll probably donate it but it was good. I’m not sure if I’m going to watch the movie so if you’ve seen it let me know if it’s worth watching. Also, let me know what you thought of the book! Thanks for reading and have a great day!

2 thoughts on “Book Review of “Room” by Emma Donoghue”