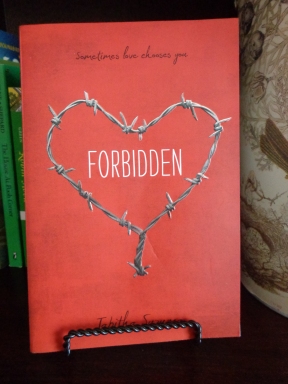 I was in the mood to read some YA drama, of which I don’t own much, so I went to Goodreads and begin to search. I came across Forbidden by Tabitha Suzuma. It had really good reviews; most of which claimed that it was “heartbreaking” and “shocking”. That sounded like exactly what I was looking for so I ordered it, received it and then read it in open mouth shock over a short period of time. Before I start the review, I’m going to say that I think this calls for some trigger warnings which in themselves may be a spoiler. I do plan to put spoilers in my review so I advise you, if you think you may want to read this, to go check out some of the reviews on Goodreads. There was quite a few without spoilers. Of course, if you decide to read the book please come back and check out my review on it. Trigger warnings for this book are: an intense incestious relationship, mild abuse (verbal), alcoholism and suicide.

Once, the Whitely family was somewhat normal. There were two parents and five kids but the father left, leaving his children with an alcoholic mother who only cares about partying and finding a new man. Lochan, seventeen, and Maya, sixteen, are the two eldest children and the weight of taking care of the younger kids and the house falls on them. As their mother disappears more often, eventually moving out for good, Lochan and Maya have to become the sole parents in the household. They go to school, pay the bills, do the chores and raise Kit, Tiffin and Willa. They work their hardest to make sure everything is taken care of so that Child Protective Services won’t separate the family. In the midst of all of this something begins to change in Lochan and Maya’s relationship. The two have always been close, best friends, but their relationship begins to turn into something that should be unthinkable for siblings. As their forbidden love grows it threatens to destroy everything. If it was to be discovered the children would be taken away and they would be arrested. Even knowing that, the two can’t stop themselves and their love ends up destroying them.

This book literally made my mouth drop open and not because of the incestious relationship. I knew that that was going to happen because it clearly says it in the book synopsis. I just didn’t expect this book to be as tragic as it was. I was expecting it to be a Flowers in the Attic by VC Andrews type story. The two do have some common elements, such as: terrible mother, no father and two siblings that fall in love. The difference, however, is how the stories end. Flowers in the Attic basically has a happy ending. I mean, yeah there’s a lot of heartache and drama but the two end up together despite all odds. Forbidden, though, is devastating. Even though you know Maya and Lochan’s relationship should NOT be happening you can’t help but understand why it’s happening. It’s obvious that they both have serious issues because of their parents, like Lochan has such extreme social anxiety that he can barely speak in public. The two have always had to rely on each other for everything and that love and dependence combined with the mental issues twisted into something terrible. The two are eventually caught, the first time they have sex actually, and Lochan is arrested. He knows that Maya could be arrested as well so to save her he kills himself. I did not see that coming at all and the author did a wonderful job just totally surprising me with it. It was so surprising that I had to go back and re-read it just to make sure I read it right. This book is by far the most tragic love story I have ever read.

I recommend and I don’t recommend this book at the same time. This book covers some very heavy subjects. It covers topics that could be triggering or depressing. I don’t think this would be appropriate for anybody under sixteen. However, the story is beautiful in it’s own way, it’s well written and I couldn’t put it down. If you’ve read this book let me know how you felt about it! Thank you for reading and have a great day!