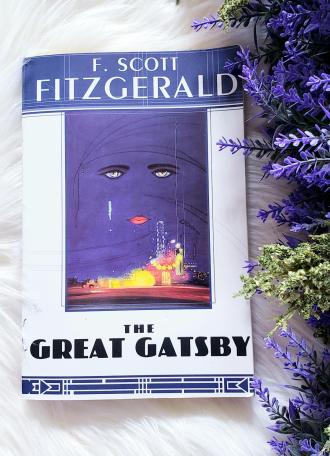 Like most American kids in public school, I had to read The Great Gatsby by F. Scott Fitzgerald. It’s been quite a few years since then and all I could remember about this book was that I didn’t like it so I wanted to give it another try. If you’re not familiar with this book, The Great Gatsby is considered an American classic and was written in 1925. It revolves around the lives and dramas of the wealthy during the Roaring Twenties. So, does 26 year old me feel differently about this book than 17 year old me? You can find out after the synopsis! This review will be spoiler free.

The Great Gatsby, F. Scott Fitzgerald’s third book, stands as the supreme achievement of his career. This exemplary novel of the Jazz Age has been acclaimed by generations of readers. The story is of the fabulously wealthy Jay Gatsby and his new love for the beautiful Daisy Buchanan, of lavish parties on Long Island at a time when The New York Times noted “gin was the national drink and sex the national obsession,” it is an exquisitely crafted tale of America in the 1920s.

The Great Gatsby is one of the great classics of twentieth-century literature.

Apparently I am just not classy enough to enjoy this book. Is it beautifully written? Yes. Was it profound for the year it was written (1925)? Also, yes. However, this book is so unbelievably boring with the most unlikable cast of characters. I do understand why it’s a classic. It provides insight into many base human emotions; such as: greed, lust and jealousy. It’s a cautionary tale about how excess won’t bring you love and happiness or even a crowd at your funeral. All of those excellent qualities still doesn’t make this book less of a chore to read. It’s a short novel that took me twice as long to get through as it should have.

If for some reason you didn’t read this in school, I still say give it a read. It’s not the most enjoyable but it IS a classic. There is a movie adaptation of this book starring Leonardo DiCaprio, who I love, so now that I’ve reread the book I think I will watch that. I’d love to know your thoughts on The Great Gatsby! Also, let me know if the movie is worth watching! Thanks for reading and have a great day!

5 thoughts on “Book Review for “The Great Gatsby” by F. Scott Fitzgerald”

If y'all aren't watching @readwithcindy on YouTube, you need to be. These are two books that she loved and I'm easily influenced so here we are😂 I can't wait to read them😍 . . . . . #book #bookblog #bookblogger #bookreview #bookish #bookworm #bookaddict #bookaholic #bookobsessed #bookgeek #booklover #booknerd #amreading #bookstagram #booksofinstagram #bookphotography #bookstagrammer #booksbooksbooks #bookcommunity #bookshelf #thebookandbeautyblog