Pet Sematary isn’t just my favorite Stephen King book, it’s my favorite horror story of all time. I’m also pretty attached to the 1989 movie adaptation. When the remake was announced I knew I was going to see it. I mean, the more Pet Sematary the better, right? I couldn’t wait to see what new life 2019 technology could breathe into this older story. Unfortunately, I was so very disappointed. Not only does this movie fail at being a decent adaptation, it fails at being a good horror movie. I’m going to break this review into a spoiler free and spoiler section. I will discuss how it compares to the book, the 1989 movie and how it holds up on its’ own. There will also be a makeup look at the very end that I did based on the cover of my copy of the book. I posted this look on Instagram but I know some of you don’t follow me there. Please keep in mind, if you know NOTHING about Pet Sematary there might be slight spoilers even in the spoiler free section. Without further ado, let’s get into the spoiler free section of the review! 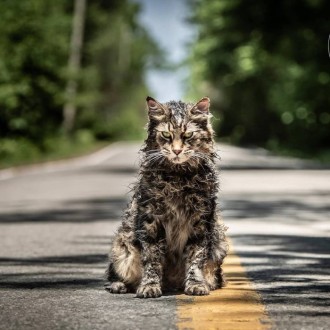 Adorable Church is the best part of this movie.

To put it simply, I hated this movie from the very first scene. Whenever I have a pretty lengthy review, I like to create a bullet list because I feel that gets across what I want to say in a more concise way so that’s what I’ll be doing here and for the spoiler section.

If you were only interested in the spoiler free section, thank you for reading. If you see the movie, I hope you enjoy it more than I did! If you would like to see the makeup look I created just scroll to the bottom past the spoilers. Now let’s get into the good stuff, the spoiler section!

I really wanted to love this movie. I went into it planning to not only judge how it held up against the book and 1989 adaptation, but also how it held up as a horror movie. Unfortunately, it did none of those things well. They changed so much that it only loosely resembles Pet Sematary and everything else is so bad that it’s ineffective as a scary movie. There was NOTHING about this that I liked. I know that some people will love this movie and that’s fine. We all have different opinions and if you love it that just means you didn’t waste your money on a movie ticket like I did. I would love to know what you thought about Pet Sematary and my review! Thanks for reading and have a great day!

Here is the makeup look I created in honor of the new movie’s release! I used the Morphe 35M Palette for everything except the green on my lower lash line and for that I used the Juvia’s Place The Tribe Palette.