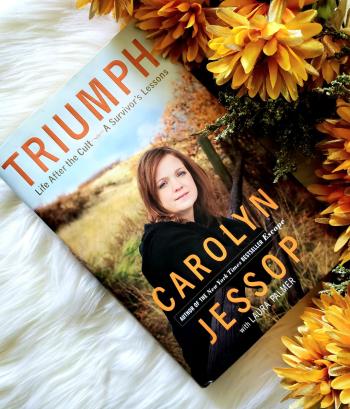 *Typically my video game review would be up today but I had to move some things around so it will be up Monday.

Last week I reviewed Escape by Carolyn Jessop so today I’m following it up with her second book, Triumph. This book is nonfiction and I recommend you read my review for Escape before this one because it explains what these books are about and who Carolyn Jessop is. I, unfortunately, didn’t enjoy Triumph as much as Escape but I’ll get into my reason why after the synopsis.

The author of Escape, which detailed her escape along with her eight children from the cult she had been raised in, the extremist Mormon sect the Fundamentalist Church of Jesus Christ of Latter-Day Saints, follows up on the 2008 raid on the Yearning for Zion Ranch, which her ex-husband ran for Warren Jeffs on a sprawling 1,700-acre ranch near Eldorado, Texas.

I mentioned in my review of Escape that my only complaint with the book was the lack of editing. While Escape was edited poorly, Triumph is even worse. I really wanted to be immersed in the story, because I find the FLDS and Jessop’s escape so interesting, but it was difficult because certain parts just dragged on and were over explained. For example, a huge chunk of the book is about the raid on the Yearning for Zion Ranch in 2008 and all of the legal proceedings afterwards. Initially, I was interested in reading about this because I assumed Jessop would be able to give information that isn’t widely available but she really doesn’t say much more than what you can already find online or in documentaries. After this huge chunk of the book, the rest of the novel is her reiterating stories that were already told in Escape with just a few new details. I honestly think this book could have been half of the length that it is but it just wan’t edited properly. Overall, I don’t think I learned anything new after reading this and I recommend just skipping it.

I hate to give Triumph a negative review. I do think Carolyn Jessop is a strong and courageous woman with an interesting story but the lack of editing makes this book a chore to read. I’d love to know what you think about this book and my review! Thanks for reading and have a great day!