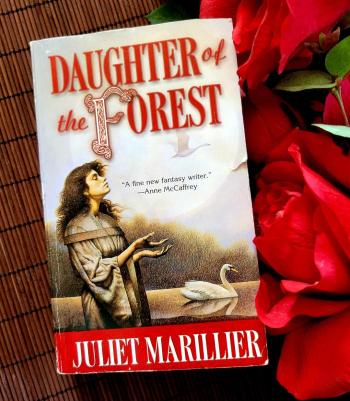 Daughter of the Forest by Juliet Marillier has taken the title of all time favorite fantasy. It is book one of the Sevenwaters Series; a six book, historical fantasy series about a prominent family in ancient Ireland. It takes place during a time when Christianity is new and older beliefs are still prominent. There’s fae, magic, romance and everything else that I adore. This review will have spoilers.

🔥I like to give a heat level rating for all books with romance. If you’re curious about my rating system, you can check it out here.

Lovely Sorcha is the seventh child and only daughter of Lord Colum of Sevenwaters. Bereft of a mother, she is comforted by her six brothers who love and protect her. Sorcha is the light in their lives: they are determined that she know only contentment.

But Sorcha’s joy is shattered when her father is bewitched by his new wife, an evil enchantress who binds her brothers with a terrible spell, a spell which only Sorcha can lift—by staying silent. If she speaks before she completes the quest set to her by the Fair Folk and their queen, the Lady of the Forest, she will lose her brothers forever.

When Sorcha is kidnapped by the enemies of Sevenwaters and taken to a foreign land, she is torn between the desire to save her beloved brothers, and a love that comes only once. Sorcha despairs at ever being able to complete her task, but the magic of the Fair Folk knows no boundaries, and love is the strongest magic of them all…

Daughter of the Forest is a “The Six Swans” fairytale retelling. This book is both beautiful and tragic. The pacing is slow, what some would consider to be boring, but the story is so atmospheric that I didn’t mind. You really feel like you’re in this ancient Irish forest with its mysteries and magic. However, the family at the heart of the forest are what really makes this a stunning tale.

Sorcha is the first daughter of seven children but unfortunately not the the seventh son her father wanted. Her mother did not survive the birth and her father never fully recovered from the loss. The death of his wife made him unable to bond with his daughter but Sorcha didn’t really mind because she had her six older brothers.

The seven children grew up as best friends in the wild forest, watched over by the fae. Change is inevitable, though, and once Sorcha and her brothers were into their early twenties and teens, their father decided to remarry. Little did any of them know, this new stepmother would bring tragedy to the family for generations…

I truly loved everything about this book but I especially loved the bond between Sorcha and her brothers. She gave up her voice and freedom to save them and they would do anything for her in return. They are tormented by the fact that they can’t help when she needs them most.

Sorcha doesn’t have an easy journey and this book does require a trigger warning for rape. The description of the rape isn’t really graphic but it’s graphic enough to be disturbing. This is not something that triggers me personally so I found it to work as a part of Sorcha’s character development, but others may not see it in that way.

It’s not all depressing, though, and there is a fantastic slow burn romance. There’s also a happy ending… of sorts. Since this is the first book of a rather long series, there had to be some unanswered questions and problems to be resolved in the future but the ending is still satisfying.

As of writing this post, I’ve already finished book two in this series, Son of the Shadows. I can tell you, with certainty, that these books are must reads for fantasy lovers. They are just so good! I’d love to know if you’ve read anything by this author because she’s written a TON of books. Thanks for reading and have a great day!