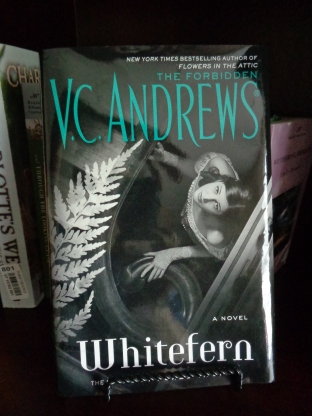 I have been on a VC Andrews kick here lately. This genre of books (drama) are something I have to really be in the mood to read. With that being said, Whitefern is one of the newer releases that I really wanted to read. It is the sequel to My Sweet Audrina and I usually would not review a sequel before the first book, however, I’ve read My Sweet Audrina around three times and I just wasn’t in the mood to read it again right now. I do not review books that I haven’t recently read. The link above will take you to the My Sweet Audrina Wikipedia page or you can read the book yourself, which I recommend. Eventually I’m sure I’ll backtrack and review it here. My Sweet Audrina was released in 1982 while Whitefern wasn’t released until 2016. I felt like this might be just a money grab by Andrew Neiderman, the ghost writer for Andrews, like he’s been doing lately with all of the Flowers in the Attic sequels and unfortunately after reading the book I’m even more sure of that.

Audrina Adare is a young, married woman still living in her childhood home with her husband, Arden, her mentally disabled younger sister, Sylvia and her father. Her marriage is crumbling because of her infertility and because her husband has grown cruel and self centered as the years have gone by. When Audrina’s father passes away the home becomes even more unhappy. Audrina keeps trying to be a good wife and take care of her sister. Sylvia loves to paint so Audrina hires an art teacher to come to their home but that doesn’t go as planned. Soon after hiring the teacher Audrina walks into Sylvia’s room to see that the teacher has made Sylvia undress. This sends Audrina into a rage and she fires the teacher for taking advantage of Sylvia. A few months later Audrina realizes that Sylvia is pregnant and Arden comes up with the plan for them, Audrina and himself, to raise Sylvia’s baby as their own. To complete the ruse Audrina will pretend to be pregnant and they go so far as to hire a nurse to live in the home with them so that none of their acquaintances will know that it’s not really Audrina’s baby. Sylvia gives birth to a girl they name Adelle and everything went perfectly to plan. That is until Audrina starts asking questions after a visit from the art teacher’s wife. His wife informs Audrina that that couldn’t be her husband’s baby because he was always infertile. Audrina confronts Arden and he admits to raping Sylvia because he wanted his own child. The two begin arguing as they’re walking up the stairs which brings Sylvia out of her room and she pushes him down the stairs. Arden dies and Audrina raises the baby with Sylvia.

Before I rip this book apart, remember that we all have opinions. If you enjoyed this book I’m glad that you did. I love VC Andrews/Neiderman’s books and will continue to read them but not all of them are masterpieces. With that being said, I hated this book. My Sweet Audrina was never my favorite because I just didn’t care for the storyline and that’s partially why I didn’t like Whitefern. The characters in both are some of the most unrealistic and strange of any of Andrews/Neiderman’s creations. Audrina is a weak character with almost no personality. Arden is just 100% cruel, selfish and unlikable. In My Sweet Audrina he watched Audrina be raped when they were children, so he knows the trauma she endured, and then when they get married as adults he proceeds to rape her on their wedding night when she’s scared of sex. With all of that, somehow she didn’t get the clue then that he was awful and she shouldn’t be with him. Another issue I had was the weird way Audrina describes her father. As a side note, all of the books that VC Andrews or Neiderman has written are known for there shock value as far as rape, incest and other controversial topics. With that being said, most of the time it makes sense in the story. In Whitefern Audrina and her father did not have any kind of incestious relationship but she describes him as sexy on multiple occasions.  On page seven Audrina says “Gray had devastated his unique black hair…and his lively, sexy, almond-shaped dark brown eyes had dulled…” Audrina also refers to how he flirted with her when she was younger like that was totally normal. None of these characters or situations are believable. Obviously, this is a work of fiction but I believe it’s supposed to be based on reality. It’s supposed to make you think that people could act that way or things like that could happen and this book just doesn’t accomplish that.

If you loved My Sweet Audrina I believe you’ll like Whitefern. If you’re like me, though, and didn’t care for the first one the second one isn’t any better. I would love to hear your opinions on this! Thank you for reading and have a great day!

I literally haven't cared about makeup or social media at all for the past week because I've been on a Sims 3 binge😂 The last time I did my eyeshadow, I used the @undone_beauty Curator Eye Quad in Outfit Optional. Once I burn myself out on Sims, maybe I'll actually try it again🙃