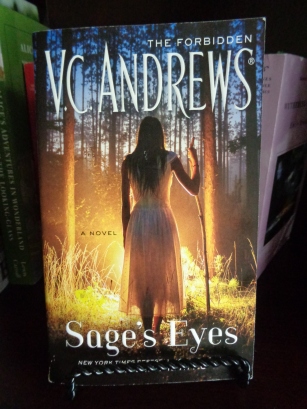 I promise this will be the last V.C. Andrews review for awhile; but like I said in my review of Whitefern I’ve just really been in the mood for these types of books. They’re quick, entertaining reads that I just really enjoy. I came across Sage’s Eyes at a Second & Charles bookstore just randomly. I had never heard of it before but Andrew Neiderman, the ghost writer for the Andrews’ estate, puts out a new book about every six months so it can be hard to keep up with new releases. Unlike most of the Andrew/Neiderman books Sage’s Eyes is a supernatural based story. There is only one other series that I’m aware of that is also supernatural and that is Daughter of Darkness and Daughter of Light. Those two books are a series based around vampires that I didn’t really care for so I was skeptical to try out another supernatural story. However, I was pleasantly surprised.

Sage is a sixteen-year old only child who was adopted as an infant. Her parents have always been overly strict with her. Sage believes it’s almost like they’re waiting for her to fail or mess up in some way. It doesn’t help that Sage has memories of experiences that couldn’t possibly have happened to her and can also sense things about other people. Her psychic abilities confuse Sage and seem to annoy her parents. As she has grown things have only gotten more tense and when she meets a boy she likes, Summer, everything in her life begins to implode. Her adoptive parents know more about who she really is than what they’re allowing her to know and Sage is determined to find answers.

I liked and disliked this book. It was a fun and short read but it didn’t have any substance to it. A big problem I have with a lot of Neiderman’s books is that the characters aren’t fully fleshed out so it makes it impossible to relate to them or really care about them. Along those same lines, his characters tend to be 100% good or 100% bad and that was the case for this book. The mother, Felicia, was this super overbearing, strict and honestly, just mean woman until the last few pages. Even when the book is ending and you find out who Sage really is there isn’t really an explanation for why her mother was so awful except for she was worried that Sage would turn out badly. Felicia was just an annoying character, to me, because she was so unlikable. Sage on the other hand, is too good. She allows everyone to push her around and take advantage of her. She never really pushes to find out why she’s different and why everything in her home is so secretive. She was just a very passive and unrealistic character. I did enjoy the big twist between Sage and Summer, which I won’t spoil, and I wish that part of the story would have been more fleshed out and not just thrown in at the end of the book. With this book you don’t really get into the good stuff until the last fifteen pages or so. It was written like there would be a sequel but it’s a stand alone book and that was disappointing.

I recommend this book if you’re just wanting a quick read to pass the time with. There isn’t really any sexual content like there is in some Andrews’ books so I feel this could be appropriate for young teenagers and up. It seemed to be written more toward younger readers and I feel they would enjoy it more than the young adult/adult age groups. That’s basically all I have to say about this book. Let me know what you think about this book or V.C. Andrews in general! Thanks for reading and have a great day!