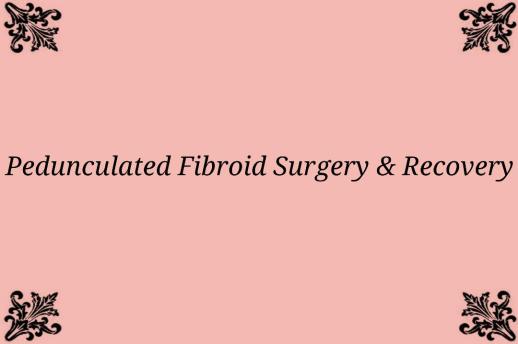 Oh boy, do I have a thrilling blog post for all of you today! I joke, I wouldn’t call this thrilling, but it might be helpful if you or someone you know is dealing with the same thing. A few weeks ago I had to have surgery for a pedunculated fibroid. I’ve linked to a medical site that can give more in depth information but what a pedunculated fibroid is is a non-cancerous growth that is attached to the uterus by a stalk called a peduncle. They can be inside or outside of the uterus. There is no specific cause but usually hormones are a factor. Usual symptoms are prolonged periods and intense sudden pain when the fibroid rotates on its stalk. The fibroid is diagnosed by ultrasound and treated with either hormone therapy or surgery.

*From here I will be talking about my personal experience with a pedunculated fibroid. I am not a doctor or healthcare professional. My experience might be different from yours and nothing that I say is meant to be medical advice. I will be talking about the female reproductive system and surgery so if that bothers you I wouldn’t read this. There will also be one picture from my surgery that was taken by my doctor. There really isn’t any blood but it is a picture of the fibroid inside of my body.

My Symptoms and ER Trip

On July 18th, Wednesday, I had a totally normal day. Around 5:00 that evening I decided to do a pretty intense at home work out. About two hours after I finished that I suddenly felt a very intense pain in the area of my right ovary. I do have PCOs and I have a history of hormone issues and ovarian cysts. I assumed I either had a really bad cyst, that I hadn’t felt previously which would be odd, or I had an ovarian cyst bursting. I tried to just rest, walk around and get a shower but the pain was coming in waves. I couldn’t do anything comfortably and I knew this was different from every cyst pain I had had before. Regular pain killers weren’t touching the pain and I couldn’t sleep so I knew I needed to head to the Emergency Room. So, off we go around midnight to the ER. They gave me Morphine, which helped but still didn’t totally make me pain free. They did a vaginal ultrasound, regular ultrasound and a CAT scan. They then told me that I had a pedunculated fibroid on the outside of my uterus and that I needed to contact my doctor to set up an appointment as soon as possible.

Previous to this day, the only symptoms I had was small twinges of pain on that side that was exactly like what I would feel if I had a cyst. My periods were basically normal, again I have PCOs so sometimes that messes with my periods, and I had no intense pain. My last vaginal ultrasound was in December and the fibroid wasn’t there then. There is no way to know for sure but I believe when I worked out it caused the fibroid to twist on its stalk and that’s why I suddenly felt pain.

Doctor Appointment and Setting Up Surgery

I was very lucky and was able to get in with my doctor that following Monday. They did their own ultrasound and told me the fibroid was a little over two centimeters wide. That sounds incredibly small but ovaries are around four centimeters wide so there was six centimeters worth of stuff making an already small area very cramped. There is a few different ways to treat these fibroids but my doctor chose to do a laparoscopy, hysteroscopy mini-laparotomy, dilation and curettage. What this is in non-medical speak is they make small incisions and use a machine called a power morcellator to go in and remove the fibroid. The benefits of this kind of surgery are: less surgical damage, quicker healing time, less blood loss, fewer incisions, less pain and less chance for infection. Since I have had trouble getting pregnant, my doctor and I agreed that during the surgery she would do a little “exploring” to see if I had any other issues we weren’t aware of; meaning, she was going to look at both ovaries, my fallopian tubes and uterus. My surgery was set up for that following Friday, the 27th.

This is the first surgery I had ever had so of course I was incredibly nervous. After arriving at the hospital that morning I was taken to a room, changed into a gown and the nurse started an IV. I had to wait for a few hours, which did nothing to help my nerves, and then it was surgery time. They wheeled me back to the operating room and within a few seconds of being back there they put a mask over my face, told me to breathe and after maybe three deep breaths I was out. A few hours later I woke up in recovery groaning in pain. The pain was not so intense that I was in tears but I definitely felt like I had been stabbed a few times. I stayed in recovery for a short time and then was taken to my room with my family. I had to eat and drink before I could leave. I was able to do that and I got to go home just a few hours after surgery.

During the surgery my doctor found that my fibroid was not just attached to my uterus but to my bladder as well. This was probably adding to the pain I had been experiencing. Besides that, she said everything about my reproductive system looked perfect, thank God. 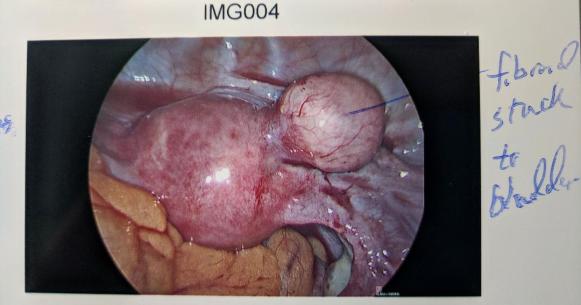 My arch nemesis, the evil pedunculated fibroid. My doctor was nice enough to give me surgery pictures. Maybe I’ll start a scrapbook 🙂

The first few days after my surgery were pretty rough. I had four incisions. I had one in my belly button, one near each ovary and one right above my vagina. The one in my belly button was by far the most painful. I had to have help getting up and all I felt like doing until around Sunday was sleeping. I noticed I started to feel much better by Wednesday. However, it has now been two weeks and I still can’t comfortably sleep on my stomach and I still have stitches, they will dissolve eventually. My incisions are healing up really well and I shouldn’t have bad scars. If you have this surgery or anything like it you are going to need help for at least three to five days after. I had cleaned my whole house and stocked up on groceries but by the time I bought groceries again a week and a half later I still needed help lifting some stuff. I would say now at the two week point I feel totally normal, unless I lay on my stomach.

The Wednesday after my surgery I did have some pretty intense pains around both ovaries but the worst of it was on my right side. I’m not totally sure because I wasn’t testing, but I believe I ovulated that day and maybe that with everything healing made it more painful than usual. I was sore around both ovaries for a few days after. I’m not sure if this was related to the surgery but I thought I would mention it in case it happens to anyone else.

I believe that was everything that I wanted to cover with this. If you have any questions about the fibroid, surgery or recovery I will answer to the best of my ability. If you’re reading this you’ve probably been diagnosed with a pedunculated fibroid or know somebody that has and if that’s the case I hope this was helpful to you! Thanks for reading and have a great day!