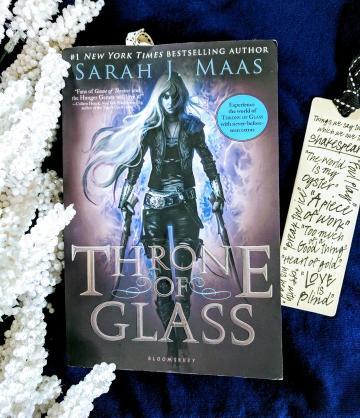 It’s time to start another super popular (and huge) series by Sarah J. Maas, Throne of Glass! A few months ago I read and reviewed the A Court of Thorns and Roses series and I liked it but I wasn’t OBSESSED with it. I actually put off reading Throne of Glass for quite awhile because the synopsis didn’t sound that interesting to me and again, I wasn’t obsessed with Maas’ writing style and I actually criticized it pretty heavily in my reviews. However, I was so very pleasantly surprised by this book. I’m going to get into the synopsis, my thoughts and some comparisons to ACOTAR. There will be spoilers.

After serving out a year of hard labor in the salt mines of Endovier for her crimes, 18-year-old assassin Celaena Sardothien is dragged before the Crown Prince. Prince Dorian offers her her freedom on one condition: she must act as his champion in a competition to find a new royal assassin.

Her opponents are men-thieves and assassins and warriors from across the empire, each sponsored by a member of the king’s council. If she beats her opponents in a series of eliminations, she’ll serve the kingdom for four years and then be granted her freedom. Celaena finds her training sessions with the captain of the guard, Westfall, challenging and exhilarating. But she’s bored stiff by court life. Things get a little more interesting when the prince starts to show interest in her … but it’s the gruff Captain Westfall who seems to understand her best.

Then one of the other contestants turns up dead … quickly followed by another. Can Celaena figure out who the killer is before she becomes a victim? As the young assassin investigates, her search leads her to discover a greater destiny than she could possibly have imagined.

Our main character, Celaena Sardothien, is everything I love in a female character. She’s tough while still being feminine, she loves to read, she loves dogs and she isn’t too perfect. I like to read other reviews when I finish a book to see what others thought. A common critique that I saw in those reviews about Celaena were that she is a terrible “tough” character because she loves to dress up in pretty dresses and get attention when she’s supposed to be a deadly assassin. I think those things make her a well rounded character. She’s not just a mindless killer. She’s also a very young woman who hasn’t really had a chance to discover herself because she was forced into a traumatic way of life. I love that she’s both tough AND feminine. Another critique I saw often is that she’s a stereotypical gorgeous main female character that is perfect in every way. I have to disagree with that as well. Yes, she is described as being beautiful but she’s also covered in scars and she’s far from always perfect. Everyone is entitled to their opinion but I really enjoyed Celaena and I’m typically very hard on female main characters.

I also love the supporting characters. It’s very obvious that our Prince Dorian, Captain Chaol Westfall and Celaena are going to end up in a love triangle. That has been way overdone in the young/new adult genres but it’s one of those tropes that I love for some reason. I would understand why it might be irritating to other readers, however. Not much is learned about either of the main male characters in Throne of Glass so I’m excited to find out more about them in the future books. I also really loved the character Princess Nehemia, Celaena’s best and only female friend. She really doesn’t become super interesting until the very end of this book so I can’t wait to learn more about her as well.

The world building has been excellent so far. This is a mostly human world but at one time there were magic and fae. I’m assuming, and hoping, that we see more of that in the coming books.

As for how this compares to A Court of Thorns and Roses, I like it so much more. I feel that Celaena is a MUCH better main female character than Feyre ever was. Feyre drove me crazy most of the time. I also already like the guys of this series much more. The writing is better as well which is confusing to me since this book was written before ACOTAR. If you’d like to see more of my thoughts on the ACOTAR series I did link it above.

If you read A Court of Thorns and Roses and didn’t like it, I think you should give Throne of Glass a chance because it’s such a better book. If you’re a fan of fantasy, adventure and romance I think that you would love this book. There is eight books in all in this series. One of those books is a collection of prequel novellas and I plan to read those last. I will be reviewing this series all through December and January so I hope that’s okay with all of you, lol. I would love to hear your thoughts on this book and if you already like it or think that you would! Thanks for reading and have a great day!