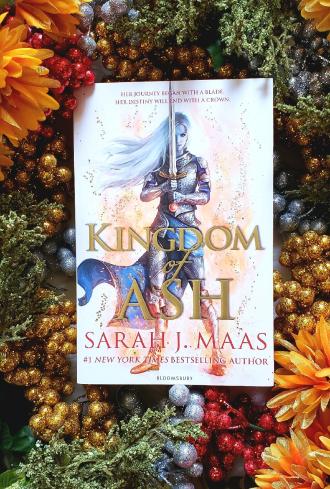 I. Am. Exhausted. Kingdom of Ash by Sarah J. Maas is the seventh book and finale of the Throne of Glass series. This book is almost 1,000 pages long. That is a lot of words my friends and if you know anything about Maas, than you know it’s a lot of the same words repeated over and over, lol. I’ll get more into my thoughts below after the synopsis. There will be spoilers.

Aelin has risked everything to save her people―but at a tremendous cost. Locked within an iron coffin by the Queen of the Fae, Aelin must draw upon her fiery will as she endures months of torture. Aware that yielding to Maeve will doom those she loves keeps her from breaking, though her resolve begins to unravel with each passing day…

With Aelin captured, Aedion and Lysandra remain the last line of defense to protect Terrasen from utter destruction. Yet they soon realize that the many allies they’ve gathered to battle Erawan’s hordes might not be enough to save them. Scattered across the continent and racing against time, Chaol, Manon, and Dorian are forced to forge their own paths to meet their fates. Hanging in the balance is any hope of salvation―and a better world.

And across the sea, his companions unwavering beside him, Rowan hunts to find his captured wife and queen―before she is lost to him forever.

As the threads of fate weave together at last, all must fight, if they are to have a chance at a future. Some bonds will grow even deeper, while others will be severed forever in the explosive final chapter of the Throne of Glass series.

This massive series is finally at an end and…

As I said above, this book is almost 1,000 pages long. It would basically be impossible for me to give a super detailed review about everything that happened throughout the story. However, I’m going to do my best to wrap up my final thoughts, the good and the bad, with a bullet list.

Overall, I did really enjoy this series. If you’re into fantasy and romance then you would probably enjoy these books. I do still have to read the prequel, The Assassin’s Blade, and that review will be up next week. If you’re reading this review I’m assuming you’ve read the series and I would love to know what you think about it! Thanks for reading and have a great day!