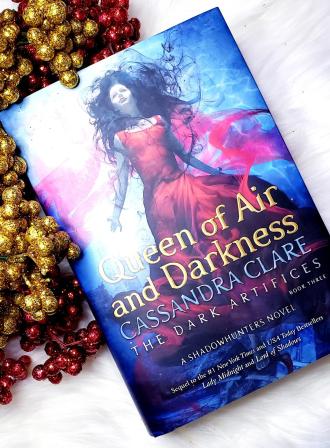 Queen of Air and Darkness by Cassandra Clare is the long awaited finale in The Dark Artifices trilogy. I am so heartbroken that after a decade of being in love with anything Shadowhunter related, I’m going to have to give this newest book a negative review. I’ve reviewed the second book in this trilogy, Lord of Shadows, but I have not reviewed the first book, Lady Midnight, or any of the other series. I read them before I started my blog but I plan to review them this year. The Dark Artifices is a spin off series that takes place after The Mortal Instruments. There is also a prequel trilogy called The Infernal Devices that takes place before The Mortal Instruments. That’s the basics of all the series so now it’s time for the synopsis and then my review. This review will be filled with spoilers.

What if damnation is the price of true love?

Innocent blood has been spilled on the steps of the Council Hall, the sacred stronghold of the Shadowhunters. In the wake of the tragic death of Livia Blackthorn, the Clave teeters on the brink of civil war. One fragment of the Blackthorn family flees to Los Angeles, seeking to discover the source of the disease that is destroying the race of warlocks. Meanwhile, Julian and Emma take desperate measures to put their forbidden love aside and undertake a perilous mission to Faerie to retrieve the Black Volume of the Dead. What they find in the Courts is a secret that may tear the Shadow World asunder and open a dark path into a future they could never have imagined. Caught in a race against time, Emma and Julian must save the world of Shadowhunters before the deadly power of the parabatai curse destroys them and everyone they love.

The Dark Artifices has never been my favorite series. I think that’s mainly because I’m still in love with The Mortal Instruments and those main characters. Of course, Jace, Clary and the gang are mentioned frequently throughout this series and play a large role in the story but the focus isn’t on them. Even though The Dark Artifices were not my favorite, I still really enjoyed the first two books in this spin off trilogy, until this one. I’m going to split this review into bullet lists of what I loved and hated.

It’s almost painful to have had my nostalgic, rose-colored glasses ripped off as hard as this book ripped mine off. I honestly don’t know what happened but I wish Cassandra Clare would have reread her older books and remembered the details of her own world and characters. I will still read the next trilogy that is being released later this year. I’ve read them all and I want to have the whole story. There’s also a chance that Clare will make improvements.  If you’ve read this book/series, please let me know how you feel about it! Thanks for reading and have a great day!