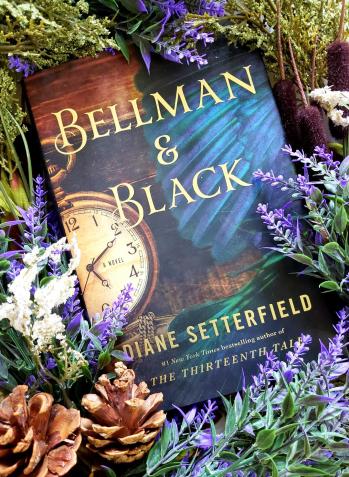 One of my earliest book reviews on this blog was for Bellman & Black by Diane Setterfieled. I can’t read hardly any of my early reviews without cringing so I’ve actually started redoing a lot of them. I decided to re-review Bellman & Black because two of my blogging friends and I decided to do a collab together that involved creating a makeup look based off the cover of a book. Bellman & Black is by far one of the prettiest books that I own and the one I chose. I decided to just go ahead and read it again to review while I was at it. The collab went up this past Monday and if you’re interested you can see it here. I’ll let you know how I feel about this book after reading it for the second time after the synopsis. This review will have spoilers. 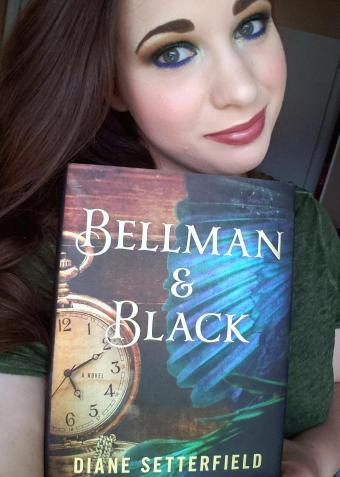 Bellman & Black is a heart-thumpingly perfect ghost story, beautifully and irresistibly written, its ratcheting tension exquisitely calibrated line by line. Its hero is William Bellman, who, as a boy of 10, killed a shiny black rook with a catapult, and who grew up to be someone, his neighbours think, who “could go to the good or the bad.” And indeed, although William Bellman’s life at first seems blessed—he has a happy marriage to a beautiful woman, becomes father to a brood of bright, strong children, and thrives in business—one by one, people around him die. And at each funeral, he is startled to see a strange man in black, smiling at him. At first, the dead are distant relatives, but eventually his own children die, and then his wife, leaving behind only one child, his favorite, Dora. Unhinged by grief, William gets drunk and stumbles to his wife’s fresh grave—and who should be there waiting, but the smiling stranger in black. The stranger has a proposition for William—a mysterious business called “Bellman & Black” . . .

When I first read this book I thought it was wonderfully eerie and well written. I do still think it is both of those things but this time around, I was horrendously bored. Perhaps it was boring to me because I knew what was going to happen but I honestly think it would be boring to most people. I do love the writing style and setting in this book. It’s Gothic fiction set in Victorian England. It’s also a slower paced and atmospheric story, which I usually love, but this one tended to be too slow.

There is only one truly developed character in this book, William Bellman. This would have been fine and could have made for a great story if William was more interesting. He starts out as a super smart boy that grows into a hardworking and flirtatious man. However, after the first few chapters all William does is work. There are multiple chapters filled with detailed descriptions of his work at the mill and later at his funeral emporium. That’s fine because it does expand on William as a character but I would have preferred to see more of him interacting with his family. It’s very hard to care about any of the characters because we never get to know them. His entire family, except one daughter, died and I wasn’t even bothered because I didn’t “know” them. I would have loved to get more than just a few chapters of him falling in love with and marrying his wife that way I could have truly been affected when she died. It’s also hard to really care about William because even though he’s the main character, he just doesn’t have much personality outside of being a hard worker that doesn’t deal with grief well.

Speaking of grief, let’s talk about Mr. Black. The book never explains who or what Mr. Black really is but I’m assuming he’s death incarnate. He can only be found at funerals, with people that have recently lost loved ones or with those about to die. I love stories about death personified (What the Flower Says of Death by Danielle Koste is a fantastic example) but Bellman & Black just doesn’t do it as well as I would like. It’s never truly clear if that is in fact what Mr. Black is and there’s also the issue of how he ties into the rook. He’s been apart of William’s life since William killed the rook as a child so is Mr. Black the rook? Does the rook represent death? Are rooks just a “familiar” of sorts for Mr. Black? Maybe I’m just missing something obvious but it’s pretty confusing, in my opinion.

This book had so much potential but it just fell flat. I doubt I’ll ever pick it up again because after two reads, I’ve gotten all there is to get out if it. I plan to read and re-review one of Diane Setterfield’s other books, The Thirteenth Tale, as well. I’m not sure when that will be up but probably in the next month or so. If you’ve read this book, please let me know what you think about it or what you think about my review in general! Thanks for reading and have a great day!