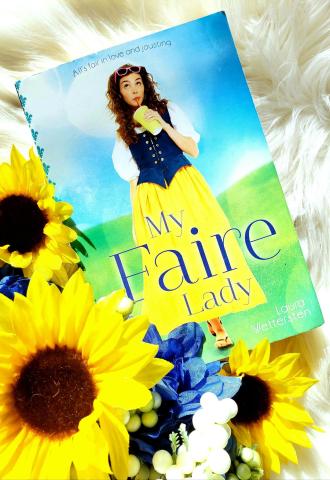 The romantic month of February is off to a good start with My Faire Lady by Laura Wettersten. I’m honestly surprised by how much I loved this book because it’s VERY YA and I haven’t been into YA for a long time. This was such a fun read but I’ll talk more about it below after the synopsis. This review will be spoiler free.

Rowena Duncan is a thoroughly modern girl with big plans for her summer—until she catches her boyfriend making out with another girl. Heartbroken, she applies to an out-of-town job posting and finds herself somewhere she never expected: the Renaissance Faire.

As a face-painter doubling as a serving wench, Ro is thrown headfirst into a vibrant community of artists and performers. She feels like a fish out of water until Will, a quick-witted whip cracker, takes her under his wing. Then there’s Christian, a blue-eyed stunt jouster who makes Ro weak in the knees. Soon, it’s not just her gown that’s tripping her up.

Trading in the internet and electricity for stars and campfires was supposed to make life simpler, but Ro is finding that love is the ultimate complication. Can she let the past make way for her future?

Who hasn’t wanted to run away and join a Renaissance Faire? Just me? That’s exactly what Rowena (Ro) Duncan does after experiencing her first heartbreak. Ro is your typical seventeen year old girl, for better or worse. Wettersten did an excellent job of making her sound and act like a real teenager. She’s funny and smart but she’s also slightly self absorbed and immature. If reading from the point of view of an angsty teenage girl who’s looking for love isn’t your thing, this isn’t the book for you.

Along with Ro, all the other characters were interesting and fun. There’s a love triangle (this is YA after all) and it’s pretty obvious who Ro will end up with. However, I felt that the book was written well enough to where I was still interested in the journey even though I had figured out the destination, if you know what I mean. The writing overall was great and the setting was excellently described. It made me want to go to a Renaissance Faire even more than I already do.

My only slight complaint with this book isn’t with the story itself but with the pacing. Ro says repeatedly that she’ll be at the Faire for the whole summer and at the end of the book she talks about how much she learned throughout her time there… she was only there for four weeks. Most of the plot takes place during week one and then the next three weeks are crammed into the last 50% of the book. I loved the story and the characters so I wish that Wettersten would have just expanded on the book and written about an actual two to three month long summer. This is only a slight complaint, however, and I don’t feel that the story suffered much because of it.

My Faire Lady doesn’t have a lot of depth but it’s entertaining and sometimes that’s all you need. I really recommend it. Does this book sound like one you’d enjoy? Let me know! Thanks for reading and have a great day!