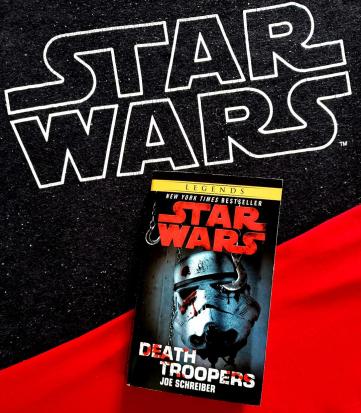 Today’s review is an interesting one… We’re heading to a galaxy far, far away with Death Troopers by Joe Schreiber. What makes this book different from any of the other many Star Wars books? Well this one has a healthy dose of zombies. As soon as I heard about this horror story set in the Star Wars universe, I had to have it. It’s definitely a unique story idea but is it any good? This review will have spoilers.

When the Imperial prison barge Purge–temporary home to five hundred of the galaxy’s most ruthless killers, rebels, scoundrels, and thieves–breaks down in a distant, uninhabited part of space, its only hope appears to lie with a Star Destroyer found drifting, derelict, and seemingly abandoned. But when a boarding party from the Purge is sent to scavenge for parts, only half of them come back–bringing with them a horrific disease so lethal that within hours nearly all aboard the Purge die in ways too hideous to imagine.

And death is only the beginning.

The Purge’s half-dozen survivors–two teenage brothers, a sadistic captain of the guards, a couple of rogue smugglers, and the chief medical officer, the lone woman on board–will do whatever it takes to stay alive. But nothing can prepare them for what lies waiting aboard the Star Destroyer amid its vast creaking emptiness that isn’t really empty at all. For the dead are rising: soulless, unstoppable, and unspeakably hungry.

I’m actually surprised by how much I enjoyed this book. I am NOT a horror fan and I’m especially not a zombie fan. I think the fact that this book was set in the Star Wars universe made it more interesting to me than a typical horror story would be. I was worried that the horror aspect wouldn’t fit with the greater Star Wars story line but that wasn’t the case. The horror and the sci-fi actually meshed together well.

Along with the overall story, I really enjoyed the characters. I especially liked the doctor onboard the Purge, Zahara Cody. It might just be my desire for more main female characters in the Star Wars world but I felt that Zahara was very interesting. I would love to see more books with her in them. I also loved the addition of Han and Chewie.

I read quite a few reviews of this book when I finished it and it seems like people are pretty divided on whether they like Han and Chewie being in the story or not. I do see where it could seem like lazy story writing and there could have been two new characters but I mean, why not throw this dynamic duo in there? I personally think it was a good choice and gave the book some comic relief. I feel like both Han and Chewie were well written and felt like themselves. There was nothing about them that stood out to me as being out of character.

However, even with Han and Chewie providing comic relief, this is a horror story. There are many deaths and most of them are gory. There are even a few child deaths that are pretty intense. I personally hate gory books but I didn’t feel this one was too graphic. It might be for some people, though, so keep that in mind.

Overall, this is a very well written book. The story line stands out in the sea of Star Wars books and that isn’t easy to do. I would personally love to see more romance, horror and any other genre adapted to this space world that I love so much. This book proves that it can be done. Does this book sound like one you’d like or no? Thanks for reading and have a great day!