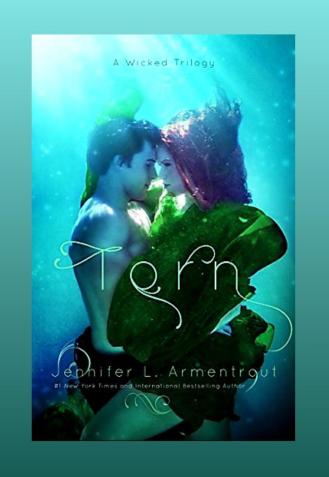 Torn is book two in the Wicked trilogy by Jennifer L. Armentrout. I recommend reading my review for the first book, Wicked, before this one. I mentioned in my review of Wicked that I was interested in the story but not that invested until around the 60% point. Thankfully, this was not an issue with Torn and I FLEW through this book! This review will have slight spoilers.

Torn between duty and survival, nothing can be the same.

Everything Ivy Morgan thought she knew has been turned on its head. After being betrayed and then nearly killed by the Prince of the Fae, she’s left bruised and devastated—and with an earth-shattering secret that she must keep at all costs. And if the Order finds out her secret, they’ll kill her.

Then there’s Ren Owens, the sexy, tattooed Elite member of the Order. Their chemistry is smoking hot, but Ivy knows that Ren has always valued his duty to the Order above all else—he could never touch her if he knew the truth. That is, if he let her live at all. Yet how can she live with herself if she lies to him?

But as the Fae Prince begins to close in, intent on permanently opening the gates to the Otherworld, Ivy is running out of options. If she doesn’t figure out who she can trust—and fast—it’s not only her heart that will be torn apart, but civilization itself.

One of the things I love about Armentrout’s writing is her flawed and realistic characters. None of them are completely perfect and this makes them feel so real. Torn, while it is somewhat about the action and story development, is primarily about character development.

At the end of Wicked, Ivy discovers that she is the halfling that Ren was sent to New Orleans to find and kill. Halflings are the children of Fae and humans. They must be destroyed because IF they have a child with the Fae, their child can open the doors between the human world and the Otherworld. Most of the Fae care nothing about preserving life and would ultimately destroy the human world if allowed in. Of course, this is exactly what the villainous Fae Prince wants to do.

In a predictable but dramatic twist, the Prince finds and kidnaps Ivy. However, in order to have his doomsday baby, Ivy must consent; that’s just part of the magical rules for some reason. Of course, Ivy doesn’t consent to this and after being tortured in the Prince’s mansion of horrors for weeks, she’s rescued by Ren and the wonderful Tink. Side note, Tink is one of my favorite characters of ALL time. After being rescued, Ivy has a serious case of PTSD but they must keep working to find a way to destroy the Prince and keep his plan from happening.

Overall, this book was really good. It was faster paced than the first one and I couldn’t wait to see what would happen next. I did find it to be predictable but still enjoyable. As I said in my review of Wicked, this series isn’t as good as Armentrout’s newest release, From Blood and Ash, but it’s still a really great read. I love the characters and the romance but I do hope the action is stepped up in the next book, Brave.

If you’re looking for a New Adult fantasy with plenty of romance, this series is for you. I’d love to know if you’re interested in reading these books! Thanks for reading and have a great day!