The Crown of Gilded Bones by Jennifer L. Armentrout is book three in the From Blood and Ash series. As far as I know, this is going to be a six book series, along with some spin off books. For me, however, the series ends here because I’m not reading anymore of it. The first book, From Blood and Ash, was a five star read for me. Its sequel, A Kingdom of Flesh and Fire, dropped down to three stars and this newest release dropped down even further at one star. I truly hate to give it such a low rating but this novel needed MUCH more editing. This review will be spoiler free as long as you’ve read the first two books.

She’s been the victim and the survivor…

Poppy never dreamed she would find the love she’s found with Prince Casteel. She wants to revel in her happiness but first they must free his brother and find hers. It’s a dangerous mission and one with far-reaching consequences neither dreamed of. Because Poppy is the Chosen, the Blessed. The true ruler of Atlantia. She carries the blood of the King of Gods within her. By right the crown and the kingdom are hers.

The enemy and the warrior…

Poppy has only ever wanted to control her own life, not the lives of others, but now she must choose to either forsake her birthright or seize the gilded crown and become the Queen of Flesh and Fire. But as the kingdoms’ dark sins and blood-drenched secrets finally unravel, a long-forgotten power rises to pose a genuine threat. And they will stop at nothing to ensure that the crown never sits upon Poppy’s head.

A lover and heartmate…

But the greatest threat to them and to Atlantia is what awaits in the far west, where the Queen of Blood and Ash has her own plans, ones she has waited hundreds of years to carry out. Poppy and Casteel must consider the impossible—travel to the Lands of the Gods and wake the King himself. And as shocking secrets and the harshest betrayals come to light, and enemies emerge to threaten everything Poppy and Casteel have fought for, they will discover just how far they are willing to go for their people—and each other.

And now she will become Queen…

I have never witnessed a book series drop in quality so much as it progresses until this one. From Blood and Ash was an incredible romantic fantasy. A Kingdom of Flesh and Fire was a boring filler book but I didn’t totally hate it because some interesting things did happen. However, literally NOTHING happened in The Crown of Gilded Bones. Sure, there was some action tossed into the last 20% of the book, just enough to get people to buy the next one, but that was it. There was no need for this book to be 645 pages but even 300 pages would have still been too long. All that happened was a ton of info dumping, talking and cringey sex scenes. This book is totally filler with almost no substance. I usually don’t discuss the authors of the books I review but I can’t help but feel that this series has turned into nothing but a cash grab. Armentrout could have created an incredible trilogy but since she decided to stretch it out, it’s now a Wattpad quality story.

I skimmed the majority of this book because I simply did not care. To summarize: Poppy becomes an all powerful special snowflake, Cas literally doesn’t have one thought that isn’t about sex and Kieran is still as boring as stale bread. It’s unfortunate because this book HAD potential. At one point, they meet an actual god but somehow Armentrout managed to make that scene boring and over with within a few paragraphs. I wanted more of that kind of action and less of Poppy’s inner monologues about how she loves cheese, loves Cas, loves chocolate, etc… and no, I’m not being sarcastic, those topics are brought up frequently.

I also hated the purely fan service scenes that Armentrout put in this book, primarily this one: 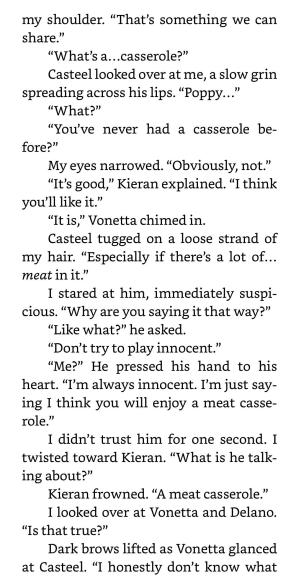 I’m a part of the Facebook fan group for this series and many of them refer to a possible future romantic scene as a “casserole.” Sorry to be a buzzkill but I think that’s stupid and I think it’s even stupider that Armentrout put it in the book but maybe I’m just not fun. Speaking of that future scene… 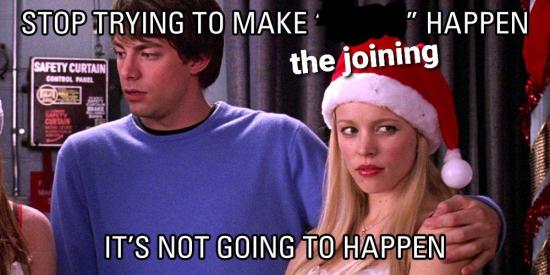 By not adding it in this book, I think Armentrout has made it clear that she doesn’t want to. I personally never wanted that scene because I think it would have made things awkward between the characters. At this point, though, I really don’t care because I don’t plan to spend anymore time or money on this series🤷‍♀️

I’ve came to the conclusion that Armentrout’s writing just isn’t for me. I DO understand why people like her books but they’re not what I’m looking for when I want well written, New Adult fantasy.

I know that my opinion is an unpopular one. From what I’ve seen, this book has been very well received and people are crazy about it. I wish I felt that way because I do like to enjoy things😂 I always welcome differing opinions, as long as they’re respectful, so feel free to let me know what you think. Thanks for reading and have a great day!

One thought on “Book Review for “The Crown of Gilded Bones” by Jennifer L. Armentrout”