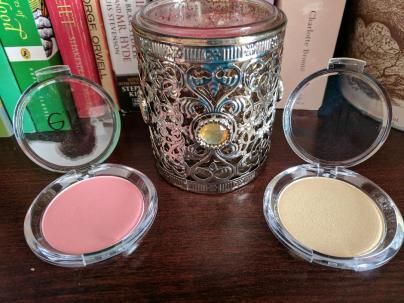 I haven’t bought ANY new makeup in about two months because I have just so much that I want to use up but when I saw e.l.f had released new $2.00 blushes and highlighters, I had to try them. I also picked up the new Beauty Shield powder but that review is coming later. I bought both in the lightest shades available. The blush shade is Blushing and the highlighter shade is White Pearl. 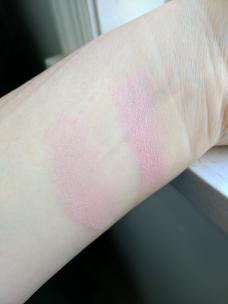 e.l.f. already had a $2.00 blush called Blushing, pictured to the right in the left picture above, that I love. I’ve reviewed it before and I wanted to see if the original Blushing was the same shade as the new one. The new one is just a tad bit darker, it’s more powdery and has more glitter. However, even though it’s darker it takes longer to build up on my face. I really like the new one except for two things: it has way too much kick up (the loose powder that flies everywhere) and it’s too glittery. The glitter isn’t too noticeable once on the skin but your cheeks will be shiny. There is two other shades in the new blushes, Bright Pink and Brick Red. If I had to recommend one of these to you I would say to go with the older, original, Blushing blush.

I really like the new highlighter, for the most part. It’s a very yellow toned highlight, which doesn’t make sense with the name White Pearl. I had the same complaints with the highlighter as I did the blush. It just had way too much kick up and glitter. However, since it’s a highlighter the glitter isn’t too out of place and doesn’t look bad on the skin. You can apply this with a light hand for a subtle highlight or apply more to really get some intense glow from it. There is two other new highlighters in this set, Glow and Shy. I definitely recommend this highlighter, especially for just $2.00.

Have you tried these or any of e.l.f.’s other new releases? I would love to hear what you think about it! Thank you for reading and have a great day!