The new e.l.f. Heart Defensor Highlighter was a total impulse purchase for me. I happened to be placing an order the day it released, thought it looked pretty and tossed it into my virtual cart. It is $8.00 and is part of a Youtube collab with a Youtuber that I’ve never watched, ThatsHeart. I actually feel kind of bad about buying this. It sold out so fast that a lot of her actual fans didn’t get to buy it and typically I wouldn’t really care about that but….I don’t like this highlighter. I did link to it above even though it’s still sold out. e.l.f. said it would be restocked in a month or two. 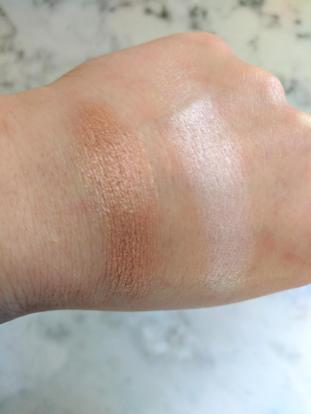 *Ignore my tragic eyeliner. I fixed it after I took the picture.

The two shades in this highlighter are called Coffee and Cream, Coffee is the darker (obviously) with Cream being the lighter one. I knew Coffee would be too dark for my skin but I loved the way Cream looked. I have not used Coffee but it feels the same as Cream so I’m assuming it applies and wears the same way. The color of Cream was perfect for my skintone. What I didn’t like is it has super chunky glitter. Side note, I’m actually using my powder highlighters less and less because I find that the glitter in them just settles into my fine lines and pores. I’ve been using my stick highlighters from e.l.f. CONSTANTLY lately; if you’re interested I’ve reviewed two of them, Fresh Morning Dew and Pink Pearl Glow. The picture above on the right doesn’t show the highlight very well but what is there is just not a smooth, natural glow like I prefer. No matter how light or heavy I applied this highlight there would still be noticeable glitter.

I’m not saying that this would be a bad highlighter for everyone. If you like glittery, blinding highlights then this is definitely one for you but if you like a more natural glow then I really don’t think you would enjoy this one. e.l.f. is releasing new highlighters, and just products in general, left and right. I actually have a huge order on it’s way with a bunch of their new stuff so keep an eye out for those reviews in the next few weeks. Did you buy this highlighter or are you wanting to? Let me know what you think about it! Thanks for reading and have a great day!