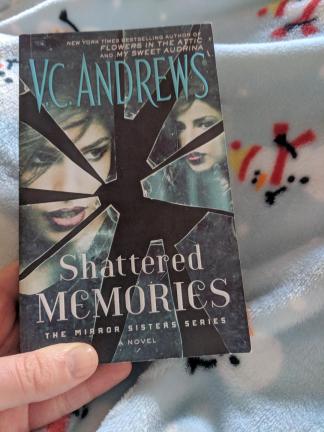 Shattered Memories by V.C. Andrews (Andrew Neiderman) is the third and final book of The Mirror Sisters series. I reviewed the first book and second book together so just click here if you’re interested in that. So, did this book sum up the series well or did it fall flat? I’ll let you know my thoughts after the synopsis. This review will have spoilers.

As identical twins, Haylee and Kaylee Fitzgerald have always done things in exactly the same way. Under their mother’s guidance their every outfit, every meal, and every thought was identical.

But now things are different.

With Kaylee back at home after her sister’s betrayal, her life has been turned inside out. Both her mother and Haylee are away and Kaylee’s alone and more lost than ever. Her father suggests going to a new school where she can have a fresh start, and where no one will know about her dark past. But if Kaylee knows her sister at all, she knows that her twin isn’t through with her yet…

I enjoyed the first two books in this series, The Mirror Sisters and Broken Glass, so I assumed I would like this one just as much but honestly it was really a dud for me. The first half or so of the book was fine. It’s all about Kaylee recovering from her abduction, starting a new school and getting a great new boyfriend, Troy. Meanwhile, Haylee is in a mental hospital receiving therapy and is gradually working toward being able to come home again. This stretches out through like 85% of the book but nothing really happens. It’s like Neiderman realized the end of the book was coming soon so he needed to do something big and shocking so what does he do? He kills off Haylee when she escapes during a home visit, meets up with her crazed boyfriend and he drives off a cliff with her in the car. Kaylee then presumably lives happily ever after. It was not an ending that summed up the series well. In fact, it left a lot of unanswered questions. How did Haylee’s death affect her parents? Did Kaylee and Troy stay together? This book just feels like there should be another one after it and there’s not. I think it was a lazy ending and Neiderman took the easy way out by just killing off the evil twin.

If you’ve already read the first two books then you should read this one just to get the full story but this definitely isn’t my favorite series. I recommend the Delia’s Crossing series over this one. If you read this review I’m assuming you’ve read at least the first two books so tell me what you thought about the series. Do you like the way it ended or feel it should have ended differently? As always, thank you for reading and have a great day!

I'm really not a bronzer person but I love the @undone_beauty Warm Up 4 in 1 Bronzer. Granted, I don't actually use the bronzers as bronzers but they make beautiful eyeshadows. I used every shade in this palette for the natural look I posted yesterday☀️