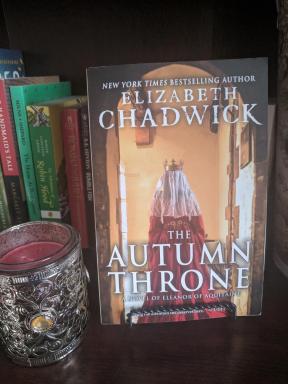 This book has left me emotionally bereft. The Autumn Throne is the last book in a trilogy by Elizabeth Chadwick. I have reviewed book one, The Summer Queen, and book two, The Winter Crown. I can honestly say that this is one of my favorite historical fiction series, ever. I’ll give you the synopsis and then my thoughts. This review will have spoilers but these books are based on actual history so I’m not sure a spoiler warning applies.

The Son She Loved. The Betrayal She Faced. The Legend She Became.

Imprisoned by her husband. Separated from her children. If King Henry II thought these things would push his queen into submission, he was wrong. Eleanor of Aquitaine refused to give into his tyranny. Freed by his death, she became dowager Queen of England. But the competition for land and power that Henry bred among his sons had grown into a dangerous rivalry that Eleanor must skillfully control. Eleanor would need every ounce of courage and fortitude as she crossed the Alps in winter to bring her son Richard his bride, ransom him from imprisonment and deal with his brother John’s treachery. Her indomitable spirit would be tested to its limits as she attempted to keep the peace between her warring sons, fend off enemies, and negotiate a magnificent future for a chosen granddaughter.

*Eleanor’s name is spelled as Alienor throughout the book for historical accuracy.

Each one of the books in this trilogy covers roughly thirty years of Alienor’s life. This last one was by far the most tragic. Alienor sees almost all of her children die, including her beloved son, Richard. She does have the opportunity to get to know some of her grandchildren and even arranges for one of her granddaughters, Blanca, to marry the French prince. This really makes it feel like the story has come full circle because the first book began with Alienor being married to the French prince at just thirteen. I thought this book summed up the series beautifully. Alienor does die at the end, as was expected, and it was one of the most heartbreaking character deaths for me because I had become so attached to her. I loved these books so much that I wanted to do some research on the history behind them. I was amazed at just how historically accurate Elizabeth Chadwick was. My favorite kind of historical fiction is when I don’t just enjoy the story but also learn something.

If you’re a fan of historical fiction or just well written books I highly recommend these. Have you read anything by Elizabeth Chadwick? If you like historical fiction, what’s your favorite book? Thanks for reading and have a great day!