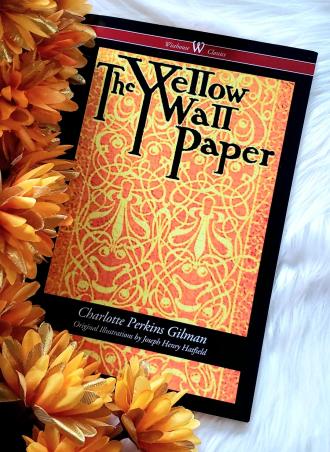 As you’re reading this, I am in Gatlinburg, Tennessee on vacation! I had to do quite a bit of pre-writing to make sure my blog stayed on schedule so I needed something I could read and review quickly. I settled on “The Yellow Wallpaper” by Charlotte Perkins Gilman. It is a short story that was written in 1892. It is a very important early work of feminist literature that deals with mental health; primarily how women with mental health issues were treated in the 19th century. This has been one of my all time favorite short stories since I read it in high school. If you’re interested, you can read it for free right here. Let’s get into the synopsis and the review!

‘It is stripped off – the paper – in great patches . . . The color is repellent . . . In the places where it isn’t faded and where the sun is just so – I can see a strange, provoking, formless sort of figure, that seems to skulk about . . .’

Based on the author’s own experiences, ‘The Yellow Wallpaper’ is the chilling tale of a woman driven to the brink of insanity by the ‘rest cure’ prescribed after the birth of her child. Isolated in a crumbling colonial mansion, in a room with bars on the windows, the tortuous pattern of the yellow wallpaper winds its way into the recesses of her mind.

“The Yellow Wallpaper” is written in first person as a series of journal entries from a woman who is suffering from postpartum depression that turns into postpartum psychosis. Her husband, John, is a doctor who forbids his wife to work, write or do anything “strenuous” so that she may rest and get better. This was a very common treatment for women in the 19th century who were “hysterical” or suffered with depression.

We never learn the woman’s name and John only refers to her as “little girl” or “dear.” This just adds to the further invalidation and patronization of this poor woman and what she’s going through. She is trapped in their room that has hideous yellow wallpaper. She eventually starts to hallucinate and sees a woman trying to break free from behind the wallpaper. As she tears down the wallpaper, she helps to free the woman, which of course, is actually herself.

I love this short story not only because of the message behind it but because it makes me eternally grateful to be a woman in the 21st century. If you’ve never read this, you really need to. It’s such an important piece of literature that’s actually an entertaining read. I’d love to know what you think about “The Yellow Wallpaper”! Thanks for reading and have a great day!