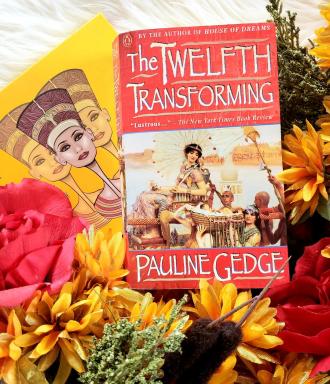 After reading Child of the Morning by Pauline Gedge, I was not looking forward to reading the other book I owned by her, The Twelfth Transforming. Child of the Morning was well written, Egyptian historical fiction but it was so bland and filled with annoying characters. I was worried that The Twelfth Transforming would be the same but thankfully, it was a million times better. That doesn’t mean this book was perfect, however. I’ll get more into my thoughts after the synopsis. This review will have spoilers.

In The Twelfth Transforming, bestselling author Pauline Gedge returns to ancient Egypt to reveal the mysterious reign of Akhenaten, the impetuous pharaoh who threatened to ruin his country. The dramatic story of Akhenaten’s disastrous ruling is also the tale of Empress Tiye, a mother struggling to save her land from the catastrophe of her son’s choices. Her brother, Ay; the leader of Egypt’s army, Horemheb; and Nefertiti, the pharaoh’s unpredictable wife, all vie with Tiye for control. Gedge’s vivid descriptions of imperial court life among the lushness of the Nile and the desiccation of the desert lands will enthrall readers seeking an evocative tale of power, dynasty, family and curses, all set in the enchanting world of ancient Egypt.

The Twelfth Transforming attempts to tell the story of a very interesting time in Egyptian history, the Eighteenth Dynasty. The key players from that time period are also the main characters in this book; Tiye, Akenhaten, Nefertiti, Horemheb and Ay. This is my favorite period of Egyptian history so I was excited to see how Gedge would portray the known historical facts while fleshing out the story with details we can only guess about.

To put it simply, this is the best Egyptian historical fiction book that I’ve ever read. It’s a rather large book but I tore through it and was never bored. Gedge’s writing style flowed smoothly from scene to scene. The settings were described excellently and made me feel like I was in ancient Egypt. She elaborated on what the characters smelled, heard, felt, etc. and those details helped to completely immerse me in the story.

This book was also incredibly researched and historically accurate- i.e., my favorite kind of historical fiction. However, history wasn’t always pretty and certain things that were normal among ancient Egyptian royalty can be disturbing to read about. To put it simply, there is a lot of incest in this book and some of it is very disturbing. Queen Tiye’s husband, Pharaoh Amenhotep III, was married to his own daughter, Sitamun, and that is in this story. That was icky enough to read about but the worst of the worst was saved for Akenhaten.

Akenhaten is almost always portrayed, in fiction stories, as being mentally disturbed. Gedge did a fantastic job of describing the infamous Pharaoh’s decent into madness and his religious fanaticism. It has been proven that Akenhaten had at least one child with his sister and that child was Tutankhamun. Gedge decided to change that and make Tutankhamun the child of Akenhaten and his own mother, Tiye. She also made Akenhaten have children with most of his own children. It is theorized that Akenhaten did have sexual relationships with his mother and children but historians do not think this was likely. Gedge doesn’t describe anything sexual in detail but these disturbing relationships might bother some readers. If you want to read a book about this time period that doesn’t include anything like that, I recommend Nefertiti by Michelle Moran.

I’m so happy that my first book review of 2020 is for a truly great book. The Twelfth Transforming isn’t appropriate for all readers but if you love Egyptian historical fiction and don’t mind the historical, but gross, relationships, I can’t recommend this book enough. I’d love to know what you’re reading right now or if you think this book sounds interesting. Thanks for reading and have a great day!