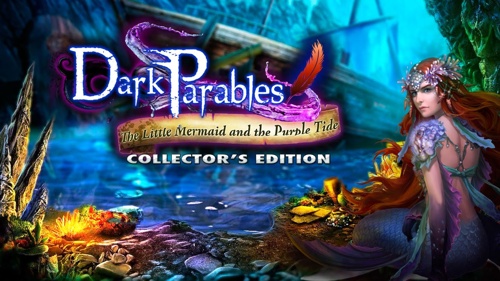 Last month I reviewed the seventh game in a lengthy series, Dark Parables: Ballad of Rapunzel, and today I’m going to review the eighth in the series, Dark Parables: The Little Mermaid and the Purple Tide. There will be a makeup look at the end inspired by the game so if you’re only interested in that feel free to scroll down. I’m not very tech savvy so while I will mention the game system requirements, I probably won’t be able to answer any tech questions. This also isn’t a walk through, only a review. Now onto the review!

Typically I copy and paste the synopsis directly from the Big Fish Games website but it is poorly written for this game so I will be getting the synopsis from the Dark Parables Wiki.

The game takes place on the Greek island of Crete. As the Fairytale Detective, we must investigate reports of a purple tide approaching the coastline, killing all marine life in its path and flooding a coastal village.

I mentioned in last month’s review of The Ballad of Rapunzel that all games created after it in the Dark Parables series were not ones that I’ve really enjoyed, at least so far. Up until now, all of my reviews for this series have been positive because I truly love the first seven games. For the eighth game, this one, the gaming company Eipix took over most of the control but still received some creative input (whatever that means) from Blue Tea Games, the original creators. I purchased The Little Mermaid and the Purple Tide as soon as it released in 2014 and it was immediately apparent that the games created by Eipix were going to be quite different… and not in a good way.

I do like some things about this game. It’s loosely based on the story of The Little Mermaid by Hans Christian Andersen. In The Little Mermaid and the Purple Tide, there are five sisters who are a part of the royal family of Prasino. All have been cursed by the Sea Goddess and transformed into mermaids, at least for some portion of their lives. The eldest sister, Naida, is the wife of Prince James mentioned in the second game, The Exiled Prince. One of the other sisters, Theresa, is one of the Red Riding Hood Sisters from the fourth game, The Red Riding Hood Sisters. Another of the sisters, Calliope, is actually based off the story of The Little Mermaid. However, throughout the game, the only sister still around is Althea, along with her father, King Alexandros. I love all of these details and the tie ins to previous games because it adds depth to the story. Sadly, that’s all I really like about this game.

The game play mechanics are where this game truly suffers, in my opinion. The previous seven games were all so smooth with very short loading screens and no lag. This game, and all the ones after it, not only have longer loading screens before the game starts but they also lag as you move from location to location and when you enter the fragmented object scenes. These are not issues that make the game unplayable but they sure make it a lot less fun.

As for the music and graphics, they’re sub par when compared to previous games. I have raved about both of those aspects in my previous reviews and they’re part of why I love these games so much. Blue Tea Games knows how to expertly use color and music to help convey emotion, Eipix does not. These are supposed to be DARK PARABLES, they should have a darker feel and tone to them. In The Little Mermaid and the Purple Tide, the colors, while pretty, are very bright. They’re almost so bright that you can’t decipher details in the scenes. It’s not that the scenes are ugly, they’re not, they just don’t fit with the rest of the series. The music is just unmemorable.

The bonus game is based on the story of Bluebeard by Charles Perrault. It’s just very bland and boring. As always, there are two versions of this game available for purchase, the original for $10.00 or the Collector’s Edition for $20.00. I DO still recommend buying it but only if, like me, you have loved the first seven games and don’t want to not finish the overall story being told throughout the series. 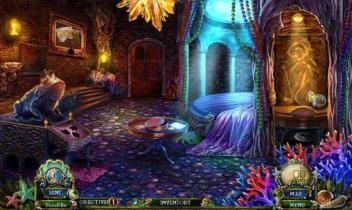 My inspiration for this look was Althea’s dress, you can see it in the bottom picture up above in the Game Scene’s section. I loved the turquoise and different shades of purple and gold accents. I really like the way this look turned out and I’m going to let you know step by step how I did it. I’ll go in the order of the swatches on my hand, top to bottom and left to right. I used a few eyeshadows and other products that I haven’t reviewed before so I’ll link to where you can purchase them and if I have reviewed it, I’ll link to my review.

As for the rest of my face, I decided to try an ombre blush look using the Flower Beauty Blush in Wild Rose (pink) blended into the LA Girl Blush in Just Dance (purple). My highlight is a mix of the Wet n Wild Highlighter in Royal Calyx (not linked because I no longer support them) and Makeup Revolution Vivid Baked Highlighter in Holographic Lights. On my lips is the NYX Cosmetics Suede Matte Lipstick in Violet Smoke topped with the single shade Limelight from Looxi Beauty.

That is everything for this video game review and makeup look! I’d love to know your thoughts about my review or the look I created. Thanks for reading and have a great day!