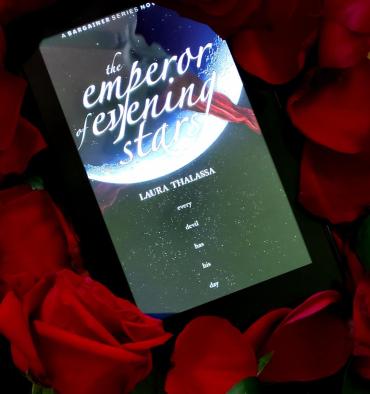 I am so sorry for how reflective this picture is! I only own this book on Kindle and its black cover makes it very hard to photograph.

The Emperor of Evening Stars by Laura Thalassa is book 2.5 in The Bargainer series. It follows A Strange Hymn and is a novella told from Desmond’s point of view. Rhapsodic and A Strange Hymn are told from Callie’s point of view so this story gives more insight into Desmond’s thoughts than what has previously been given. I’ll let you know my opinion on this novella down below after the synopsis. This review will be spoiler free.

In the beginning, there was darkness.
Before he met Callie, before he became the Bargainer, there was Desmond Flynn, the bastard son of a scribe. A boy born to a weak mother, cursed with little magic, and destined to marry a slave.

But fate had something else in mind.

Till darkness dies.
From the barren caves of Arestys to the palace of Somnia to the streets of earth, this is how Desmond Flynn, a fairy who began with nothing, became the Emperor of Evening Stars.

I’ve given some warnings for the previous two books but The Emperor of Evening Stars doesn’t require any. It’s still a New Adult book but it’s much tamer than its predecessors.

I typically don’t like novellas because they tend to feel like useless filler content; A Court of Frost and Starlight by Sarah J. Maas is a prime example of this. However, I actually really loved The Emperor of Evening Stars. I like Callie but I love Des so a story from his point of view was exactly what I wanted. This novella primarily focused on his back story and answered a lot of questions about his parents and younger years. It also elaborated on what he was thinking when he first met Callie and gave his point of view for a few of the main events in the first two books.

I only have one slight complaint and that is I wish the story would have spent more time on Des’ mother and his childhood. That part of the novella was slightly rushed through, which is a shame because Des’ mother is a very interesting character. Other than that, I feel like this novella really added to the overall story. You could technically skip over it and not miss out on a ton of information but I do recommend reading it.

I’d love to know if you enjoyed my review or if this series seems like one you’d enjoy! I’ll be reviewing the last book in the series, Dark Harmony, next week. Thanks for reading and have a great day!