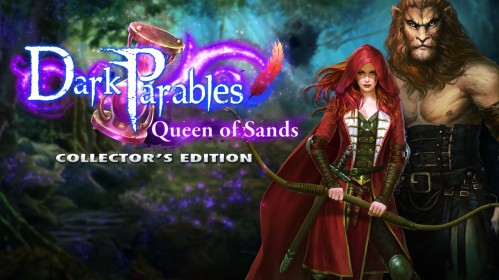 Last month I reviewed the eighth game in a lengthy series, Dark Parables: The Little Mermaid and the Purple Tide, and today I’m going to review the ninth in the series, Dark Parables: Queen of Sands. There will be a makeup look at the end inspired by the game so if you’re only interested in that feel free to scroll down. I’m not very tech savvy so while I will mention the game system requirements, I probably won’t be able to answer any tech questions. This also isn’t a walk through, only a review. Now onto the review!

Townspeople are disappearing in the provincial city of Montafleur as its streets are overrun by nightmarish creatures that vanish into a purple mist. The Red Riding Hood Sisters were called in to investigate, but they’ve got their hands full chasing a ferocious beast last seen along the outskirts of town. Explore the lush French countryside as you team up with Ruth and Brianne to uncover the dark secrets behind Montafleur’s world-famous perfumes. Unmask the true villain, before their nightmares spread to the entire world.

Queen of Sands is the second Dark Parables release to be created primarily by the gaming company, Eipix. It was released in 2015. I have the same issues with this game that I did with The Little Mermaid and the Purple Tide, primarily the game play mechanics. 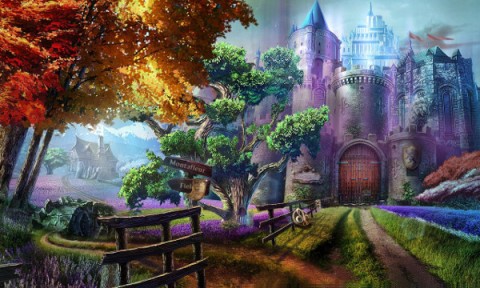 The first seven games that were created by the gaming company Blue Tea Games were all smooth with very short loading screens and no lag. This game, and all the ones after it, not only have longer loading screens before the game starts but they also lag as you move from location to location and when you enter the fragmented object scenes. I did notice that this game seemed to lag less than The Little Mermaid and the Purple Tide, however. These are not issues that make the game unplayable but they sure make it less enjoyable. 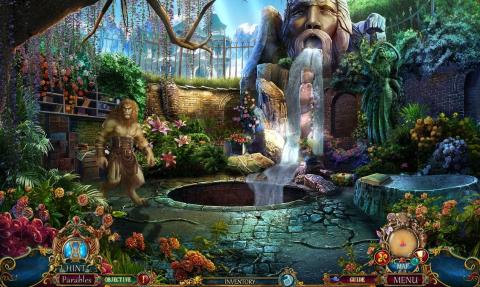 The music and graphics are sub par when compared to the original Blue Tea Games. I do find the graphics in this game to be prettier than The Little Mermaid and the Purple Tide but that’s just my opinion. I have raved about both of those aspects in my previous reviews and they’re part of why I love these games so much. Blue Tea Games knows how to expertly use color and music to help convey emotion, Eipix does not. These are supposed to be DARK PARABLES, they should have a darker feel and tone to them. In The Little Mermaid and the Purple Tide, the colors, while pretty, are very bright. They’re almost so bright that you can’t decipher details in the scenes. It’s not that the scenes are ugly, they’re not, they just don’t fit with the rest of the series. Queen of Sands is a bit more toned down, which is why I like it more, but it’s still very bright. The music is unmemorable but, if you’re interested, here’s a link to a collection of music for the entire Dark Parables series. It’s worth checking out for the first seven games alone.

As for the story line, I thought it was fine. It wasn’t really detailed or intriguing but it wasn’t awful. It’s loosely based on the story of Beauty and the Beast but primarily revolves around the Sandman, a mythological creature. There are a few references to previous games which I typically enjoy. We, the detective, are assisted by the Red Riding Hood Sisters who we first met in the fourth game, The Red Riding Hood Sisters. We’re also briefly helped by Rapunzel from the seventh game, Ballad of Rapunzel. Rapunzel’s cameo felt very odd and like they were just trying to throw in more references to the previous, and more beloved, games. The main characters were just kind of boring. There’s Eric, the prince that has been cursed into the form of a lion, and Mab, the Queen of Sands and sort of villain. All games by Eipix just lack detail when it comes to the story so it’s difficult to be really invested or get to know the characters. 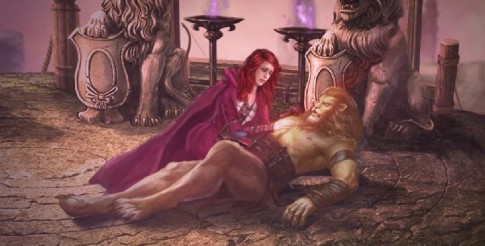 The bonus game is based on the fairy tale The Seven Ravens. In it we learn more about Mab’s backstory and I did enjoy it. As always, there are two versions of this game available for purchase, the original for $10.00 or the Collector’s Edition for $20.00. I DO still recommend buying it but only if, like me, you want to complete the overall story being told throughout the series. 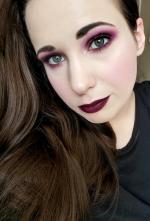 My inspiration for this look was Mab’s dress and just her color palette in general, you can see her in the last picture up above. I really loved the berry and cooler tones. I like the way this look turned out and I’m going to let you know step by step how I did it. I’ll go in the order of the swatches on my wrist, top to bottom and left to right. I used a few eyeshadows and other products that I haven’t reviewed before so I’ll link to where you can purchase them and if I have reviewed it, I’ll link to my review. I did set my primer with a random cream eyeshadow and won’t be mentioning it below.

That is everything for this video game review and makeup look! What are your favorite video games to play? Does the Dark Parables series look interesting to you? Thanks for reading and have a great day!

My favorite color is green and I love any shade of it🌿🍃 Chartreuse is one of my top favs, though💚💛 Makeup details⬇️