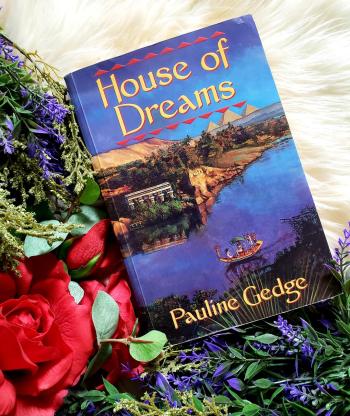 I’ve reviewed two books by Pauline Gedge, Child of the Morning and The Twelfth Transforming. I disliked Child of the Morning so much that I didn’t even finish it while The Twelfth Transforming, on the other hand, is currently my favorite Egyptian historical fiction book of all time… clearly my love for Gedge’s work varies wildly. House of Dreams falls somewhere between those other two books. I’m not crazy about it but I don’t hate it. This book is part of a duology called Lady of the Reeds. This review will have slight spoilers.

In the tiny hamlet of Aswat, far to the south of the royal capital, a beautiful young girl wants more than the meagre prospects her village offers. Determined and resourceful, she is quick to leap upon an opportunity when the great seer Hui, who is also physician to Pharaoh, visits Aswat to commune with its god, Wepwawet. Taken under Hui’s wing to become a healer, she has no idea of his real plans for her—plans that will bring her close to Pharaoh as his favourite concubine, but will ultimately enmesh her in court intrigue of the most dangerous kind.

House of Dreams is a powerful story of passion and jealousy, rich with the details of Ancient Egyptian life.

Gedge has a way of bringing ancient Egypt to life. The way she describes the most mundane details, like the scent of the oils and incense, just fully immerses you in the story. Even if I don’t care for a particular book by her, I’m always impressed by her writing abilities and the evident research. The research that clearly goes into her books is even more impressive when you realize that most of them were written before the internet. This book is just like any written by her; a well researched and descriptive page turner. However, I do have some issues that kept this from being a five star read. Those issues primarily revolve around the characters but especially the main character, Thu.

Thu was born to a peasant family during the reign of Rameses III. She’s intelligent and wants more out of life than to follow in her midwife mother’s footsteps. As she trains with her mother, she learns about different herbs but that doesn’t satisfy her thirst for knowledge. She convinces her older brother, Pa-ari, to teach her to read against her parents’ wishes. When the seer, Hui, visits her village, she uses her cunning and intelligence to sneak aboard his ship. He’s impressed by the educated young girl with the blue eyes and decides to train her as a healer. What Thu doesn’t know, however, is that Hui plans to train her to be much more than just a healer.

My issue with the Thu is the same issue I had with Hatshepsut from Child of the Morning, she’s simply unlikable. Of course, people in real life are unlikable so it makes sense for characters to be unlikable too BUT when we’re stuck in that character’s head for the entire book, it can be annoying. To have been born into a kind and caring peasant family, Thu is unbelievably selfish and spoiled. When she’s taken into Hui’s house, she’s given every luxury. Instead of staying humble, as you might expect because of her background, she not only becomes accustomed to luxury but expects it. She’s rude to the servants and everyone else but for some reason most of the other characters love her. She’s an Egyptian Mary Sue. She’s the prettiest and oh, so special with her blue eyes. She’s also the smartest and the most cunning… at least that’s what she thinks.

Unfortunately, Thu is too self absorbed and immature to realize that almost every person around her is using her for their own gain. You can’t help but feel sorry for her because while she is unlikable, she’s also a child that’s being manipulated by the adults around her. Hui and his circle of friends want to influence the politics of the kingdom. They plan to do this from the inside by using Thu. Hui brings Thu before the Pharaoh, knowing he would be attracted to her rare beauty.

Gedge doesn’t shy away from the gritty details of history and so this fourteen year old child becomes the concubine of forty-five year old Rameses III. From here, I wouldn’t say the book was boring but it was never as exciting as I wanted it to be, despite there being a literal murder plot. Thu had her likable moments but overall, she’s just not endearing and the same goes for all the other characters. However, the ending was shocking enough that it made me want to read the sequel, House of Illusions, despite not being in love with this book.

I like this book but I doubt I would read it again. I have already finished the sequel and I can honestly say that while I don’t regret reading them and they were enjoyable over all, they’re not stand outs. My review for House of Illusions will be up next week. Let me know what you think about this book or my review! Thanks for reading and have a great day!