Today I’m going to review the eleventh game in the lengthy Dark Parables series, The Swan Princess and The Dire Tree. Back in November, I reviewed the tenth game, Dark Parables: Goldilocks and the Fallen Star. There will be a makeup look at the end inspired by the game so if you’re only interested in that feel free to scroll down. I’m not very tech savvy so while I will mention the game system requirements, I probably won’t be able to answer any tech questions. This also isn’t a walk through, only a review. Now onto the review!

The game takes place on the fictional Dire Island, home of the Swan Kingdom. As the Fairytale Detective, we are summoned to the island to retrieve a Magic Seed that has been stolen by a former member of the Swan Guard. Once we do so, events take a rather sinister turn.

The Swan Princess and The Dire Tree was released in 2016 and is the fourth game in the series created solely by Eipix. I’ve given mostly negative reviews to all of the games in this series created by Eipix but I actually really like this one.

My main issues with the previous three games were the game play mechanics and story development… or lack thereof. The game play mechanics for this one aren’t much better and it’s a bit laggy as you move from location to location but it did seem to be marginally improved. There is a fast travel option included in the game map and by using it the issue can be avoided altogether.

The graphics and the music, however, were perfect; I would consider them to be on par with the original seven Dark Parables games. If you’re interested in the music from the entire series, you can listen to it here.

The story development was also excellent and I felt that this game really added to the overall story being told throughout the series. We play as the Detective who has been sent to Dire Island, the home of the Swan Guard, to apprehend the Black Swan. The Black Swan is a traitor and wanted for stealing the new magic seed from the top of the Dire Tree, which allows the goddess Flora to regenerate her powers. Without the seed, the restoration ceremony cannot take place, and therefore, the life force of Dire Island, and the world will begin to die. This game ties into the second game, The Exiled Prince, and the seventh game, Ballad of Rapunzel.  The game as a whole is loosely based on the Russian ballet, Swan Lake. 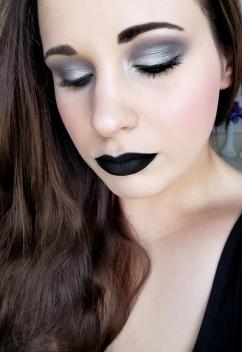 This look was inspired by all the colors of the swans in the game; black, white and gray. I used these palettes: Morphe 35V (shades Knockout & Little Black Book), Lorac Shine Bright (shades Crepe & Haze) and Juvia’s Place Nubian Coral (shades are unnamed but all the gray/silver ones). As always, I used the essence Colour Intensifying Eyeshadow Primer and set the primer with a cream shade. Not all of the shades I used have names so I’ll just describe what they look like. I’ll go in the order of the swatches on my wrist, left to right.

If you are curious about any of the other products on my face, you can find this look in my recent posts on Instagram.

I hope you all enjoyed today’s review and makeup look! I would love to know if this game or series sounds interesting to you and what you think about the look I created! Thanks for reading and have a great day!